When it comes down to it, no one likes paying taxes. In fact, some Americans even specifically seek out tax-free states to call home to avoid one of the largest contributors to their annual tax bill; especially if they are trying to improve their finances. While there aren’t any no-tax states, there are currently seven states in the U.S. that do not have any income taxes: Alaska, Florida, Nevada, South Dakota, Texas, Washington, and Wyoming

Despite the fact that residents living in states with no income tax might save money in one way, they might pay more in others because the loss of revenue is usually compensated with other taxes. In this article, we’ll dive deeper into what living in a state without income tax means based on certain circumstances so you can determine whether it’s financially beneficial to you.

Have a specific question you need to be answered? Use our link list below to easily navigate to different sections:

What States Have No Income Tax?

Do Any States Have No Income Tax and No Sales Tax?

Does Living in a No Income Tax State Mean You Don’t Pay Any Income Taxes?

How Does Not Having a State Income Tax Affect You?

How Does the Tax Burden Compare in States with No Income Tax?

Is It Better or Worse to Live in a State with No Income Tax?

What States Have No Income Tax?

While there are technically nine states that don’t have income taxes on salaries and wages, there are only seven that are completely income-tax-free: Alaska, Florida, Nevada, South Dakota, Texas, Washington, and Wyoming. The other two, Tennessee and New Hampshire, still have some income-related taxes. 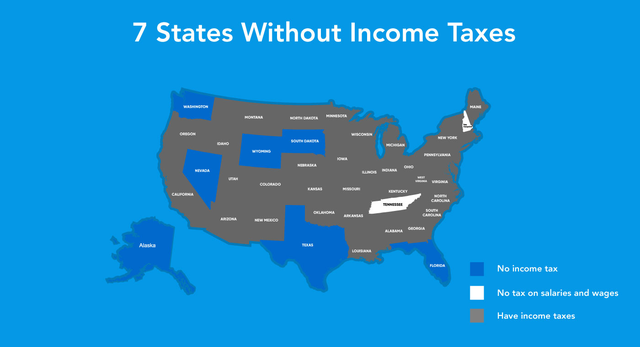 Let’s dive a little deeper into the details on the tax situation in these states with no income tax:

Alaska has not had an income tax since 1980. While there have been several attempts to reinstate the personal income tax over the years, they have not been successful. The state government decided to repeal income tax after the completion of the Trans-Alaska Pipeline System, which created billions of dollars in revenue.

Florida does not have a statewide personal income tax; it was repealed in 1855. However, they do have a corporate income tax.

Nevada does not have a personal or corporate income tax. One reason Nevada is able to forgo income taxes is because the state brings in a large source of revenue from gambling and other tourism sources.

South Dakota has not had an income tax since 1943. However, they do have a variety of special taxes that are applied to many goods and services including a precious metal and energy mineral severance tax, alcohol occupational tax, and various licensing fees.

The state of Texas does not have an income tax. Over the years, many lawmakers and taxpayers alike have fought to maintain this policy.

For decades, Washington has had a state income tax prohibition. However, there has been significant controversy over this policy over the last few years.

Wyoming taxpayers have it fairly easy with no personal or corporate income tax and relatively low taxes overall. 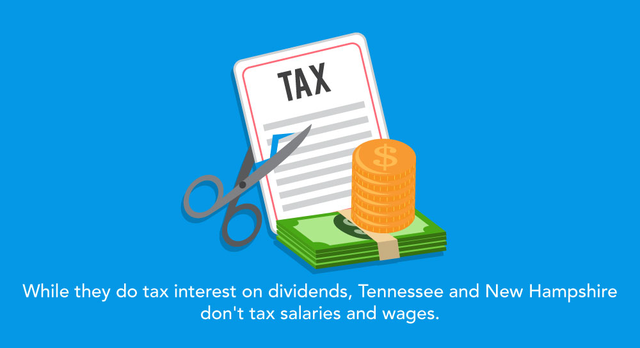 New Hampshire does not tax on salary or wages, but there is a 5% interest and dividends tax (I&D tax). However, the tax will be eliminated by 2025. The state plans to reduce the tax by 1% each year, starting in 2020, to phase out the T&D tax.

Once this happens, New Hampshire is poised to be one of the most tax-friendly states.

Like New Hampshire, a bit of good news for Tennessee taxpayers is that the Hall Income Tax will be eliminated by 2022. This means that Tennessee will be completely income tax free in just a few years.

Do Any States Have No Income Tax and No Sales Tax?

In the strictest terms, there are no states that truly have no income tax and no sales tax. However, Alaska and New Hampshire technically qualify if you consider their unique circumstances:

While they do have income taxes, there are some other states that don’t have statewide sales taxes: Delaware, Montana, and Oregon. However, in Montana, certain resort destinations such as Big Sky do impose local sales taxes.

Does Living in a No Income Tax State Mean You Don’t Pay Any Income Taxes?

It is important to note that there are no completely tax-free states in the U.S. Just because you live in a state with no income tax doesn’t mean that you are completely off the hook from income taxes altogether. You may need to pay federal income taxes if you exceed the threshold based on your annual income. 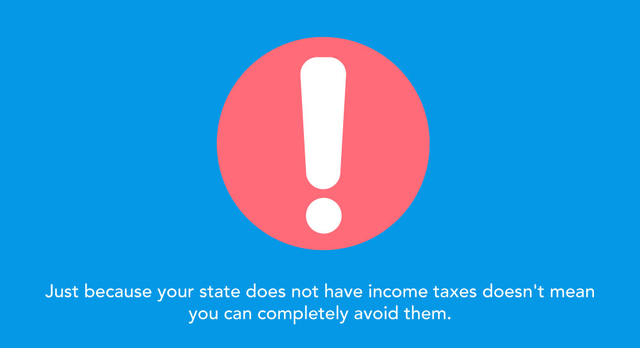 There are also two instances where you may need to pay income taxes to another state:

Aside from income taxes, you could still have to pay other taxes that apply to you on both the state and federal level. Fortunately, recent tax reform has lowered federal tax bills for many Americans.

How Does Not Having a State Income Tax Affect You?

It might seem ideal to live in a state with no income tax, and for some, that may be true. After all, you’d most likely be taking home more pay from your job that you worked so hard for. However, there are certain factors to consider that may make it less beneficial for certain individuals.

Higher Rates for Other Taxes

According to TaxFoundation.org, states with no income tax have to generate tax revenue in other ways. As such, you’ll likely be paying higher:

For example, sales taxes are one of the greatest sources of revenue for states like Nevada and Wyoming.

In addition to paying higher property and sales taxes, the cost of living may be higher than some states that still have income taxes. It is not uncommon for taxpayers in these states to pay more for housing, gas, healthcare, and college tuition. Additionally, essentials like utilities, healthcare, and food costs might even be significantly more costly.

In fact, both Wyoming and Texas had a higher cost of living than more than half of U.S. states. Similarly, New Hampshire levies the highest property taxes per capita.

Without the revenue from income taxes, some states don’t invest as much in critical initiatives like education. The job market is also important to consider. If there are not a lot of job opportunities for your industry in the state, it could make it much more difficult to achieve financial stability.

Additionally, the state’s economic health, political standing, and culture could also impact your quality of life.

How Does the Tax Burden Compare in States with No Income Tax?

Despite their lower tax burden rankings, that does not necessarily mean that they are always the most affordable states.

Is It Better or Worse to Live in a State with No Income Tax?

Whether or not it is beneficial for you to live in a state without income tax depends on your circumstances and lifestyle. To accurately weigh the pros and cons, consider some of these points:

In the end, you want to be able to determine whether you’d actually save money by not paying income taxes, or if the additional taxes and cost of living would actually cause you to spend more. 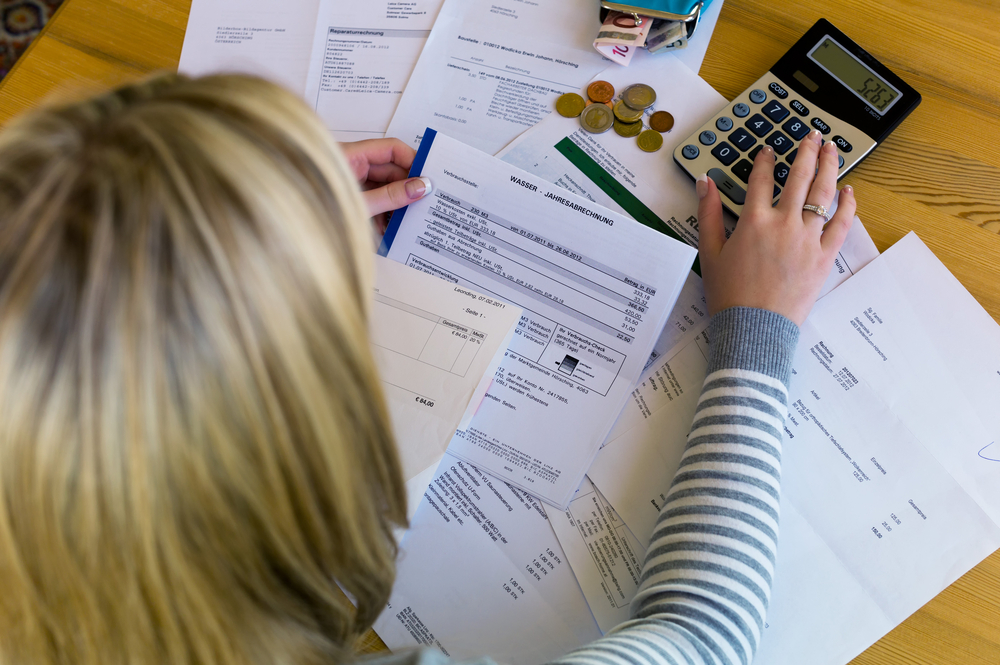 Remember, when you’re trying to determine your living budget, you want to use your annual net income. Using your gross income vs. net income can make a significant difference when trying to establish the most accurate plan for what you can afford.

If you do get into a situation where you can’t afford your cost of living, let alone your tax bill, it’s important to take the right steps to correct your course. Neglecting to pay your taxes and accumulating back taxes can severely impact your credit.

When trying to improve your personal finances, it’s important to consider all of your options carefully. If changing your state of residence isn’t the right solution for you, you have plenty of alternatives. Whether you’re focused on paying off student loans, credit card debt, or saving up to buy a home, using financial planning and management tools like Turbo’s free mobile app is a great first step toward financial freedom.