Over the past five months, I’ve had the unexpected pleasure of traveling the country with Mint to talk in 11 different cities about money in celebration of the book my company recently released, The Financial Diet. My partner Lauren and I, along with our spouses or other members of the TFD team, joined Mint up and down both coasts and in the middle of the country to speak honestly with our audience about what money means to them, and the unique challenges that their city brings, financially. (Oh, and we also drank awesome wine and had tons of great finger food — but that joy was somehow secondary to the genuine love we felt being with the community we have grown over the past few years.)

And talking about money, for us, isn’t just a hashtag, or a way to promote our book. It is the very reason we have done what we do these past few years, the thing that motivates us when we get up each day for work. Because if I hadn’t been lightly pushed by my exasperated then-boyfriend to download Mint four years ago, and forced myself into a conversation about my finances that has grown past anything I could have ever conceived, I would still almost certainly be in a position where money alternately terrified and bored me. I was terrible with money because I refused to talk or even think about it, and everything from ruining my credit score to going into credit card debt felt completely irreversible because of that fundamental fear. But I know now that in talking about money, in confronting it head-on and making it a value-neutral, ongoing conversation in your life, you can overcome any obstacle or fix any mistake, financially. Life is long, and today is always the best day to get started living it well.

It was interesting, though, seeing that even amongst the groups of women who came to our events, who came from incredibly diverse backgrounds and approached their individual finances in entirely different ways, that there were themes which kept reappearing over and over. Yes, there were unique challenges to each city (Austin is growing much too quickly for its residents to keep up, Atlanta is in desperate need of improved public transportation), but there were also common threads that we heard almost without exception at each stop. Here, the four things we heard most frequently while talking about money on the road.

“My partner and I don’t agree about how to deal with money. How do we overcome that?”

One of the biggest recurring themes at our tour events was the idea that couples fundamentally disagreed on how to handle, or even talk about, money. And that’s not surprising — everyone comes to a relationship with money baggage, whether it comes from being raised with a lot of it, very little of it, or something in-between. Some people were raised to avoid the topic entirely, others were taught to micromanage every detail. And as our money and relationships expert Olivia Mellan explains in our book, the most common dynamic in relationships is a spender who is married to a saver, in whatever form they may take. One person simply plays closer and more conservatively with money than the other, and from that fundamental disagreement can stem near-endless problems.

But two fundamental components of any healthy, long-term relationship from a financial view are 1) speaking openly and frequently about money, so that secrets cannot accrue or small cracks cannot expand, and 2) having a separate, independent bank account for each member of the couple which is totally their own. Even if it’s just a very small amount, a tiny discretionary fund, it is so important for each person to feel empowered and fulfilled by what they want to spend (or save) on without having to ask the other person for permission.

In your “fun fund,” you might want to devote half to saving for a girl’s trip and half to spending on skincare products. Or you might want to use it to take yourself to movies and dinner sometimes, or just save for something big you can’t even imagine yet. But having money that is entirely individual provides a release valve for all of the other compromises that will be made on the money you share.

Two people never have to fully agree on money, but they do have to learn to live with one another’s money baggage and differing approaches. Having the topic be an open, value-neutral one, and having that separate money for individual spending, allow that to happen.

“What do you do when you earn much more than your friends, or much less?”

One story I found myself telling over and over on the tour was the experience I had through high school and college, when I was a decidedly middle-class person in an undeniably rich-kid town. I socialized with many, many people whose parents earned (literally) ten times what mine did, and whose lives and access looked wildly different as a result. And aside from profoundly skewing my idea of what “normal” was — I didn’t know then that it wasn’t normal to have many friends who went to a $30,000-per-year high school — it also led me to spend money I didn’t have in an effort to keep up appearances.

I went into credit card debt, tanked my credit score, and drained eight years’ worth of summer job savings all in the span of about a year, wasting that money on a lifestyle that never belonged to me. And from that experience, I learned that the most important thing anyone can do for their mental health when it comes to the finances of your social life is to make sure that you have at least some friends who are close to your level, financially, because being the only one on one side or another of the spectrum will only lead to a distortion of perspective and deep self-consciousness.

Beyond that, it is up to the person who is more comfortable financially to lead the conversation, offer options, be candid with costs, and not expect the other person to follow suit. Having more money in a friendship is a great place of privilege, and one that requires both sensitivity and understanding that the conversation might not come easily to the person with less. But above all, no matter how much you earn, the phrase “it’s not in my budget” needs to be in everyone’s vocabulary. There is nothing chic about going into credit card debt to pay for someone else’s idea of a social life.

“Do I really have to have a retirement account?”

At the risk of sounding like your parents, yes. Absolutely yes.

And although the women at our events were almost universally savvy, motivated women, this question came up again and again. Having a retirement account can feel like that sort of vague, important-in-theory thing you can easily put off, but every day you are not putting that pre-tax money away (and particularly if you are missing out on an employer match) is a day you will be kicking yourself for later.

Although it may not feel that way, we will all want to retire one day, and not having the option to leave our jobs is something that no one should have to face. The younger you start saving, the more time you have to let that money grow and work for you, and although it may not be as immediately-satisfying as spending that money on something you want in the short term, once you start your retirement saving, there is a profound comfort to be found in watching it grow over time and knowing that that money is the nest you are building for yourself, because you care about yourself enough to take care of Future You.

“How do I balance paying off my loans with living life?”

Ultimately, the biggest question that most people face when it comes down to the day-to-day of personal finance is how to live the life you want while doing what is right for you. And for many people, that means balancing their loan payments (which for many people can feel overwhelming) with the other things you’d frankly much rather be doing with your money. But something we have learned over the years at TFD is that, first of all, you probably need much less than you imagine you do to be happy.

When we were first starting the company and could not take a salary for over a year, Lauren and I suddenly saw our household incomes drop by nearly half, and had to severely reduce our lifestyles as a result. And though it was self-imposed in starting a business, it taught us that so much of what we were spending on, so much of what we felt was necessary to our happiness or fulfillment, was really just mindless buying.

Lauren as an example lived at home until she was 25 in order to help pay down her loans, and though she certainly longed to live on her own earlier, she was able to find a readjusted idea of happiness while living with her parents. When I went to community college instead of the four-year schools I dreamed of to save money, I wished I could sign on the dotted line to go to those dream schools, but I learned to be happy in the life I was living.

The greater the gap you can create between “what you could technically afford to spend” and “what you need to spend in order to live well,” the wealthier you will feel, regardless of what you earn. And if repaying loans is part of your day-to-day money life, you must learn to treat that money as never yours in the first place — you can’t count what your life would be like with that loan money and then watch it go out the door, or you will be full of resentment and envy each month.

You have what you have, you owe what you owe, you are who you are.

Now with all that information, take stock of your life. Go through every purchase last month and highlight every one you don’t remember making. Realize how much of your spending is done without even thinking, and how many purchases really don’t bring you much happiness in the long run. And if you can start thinking about your money like that — reduced down to the essence of what matters, and what has real value — suddenly the balancing act won’t seem nearly as hard as you thought. 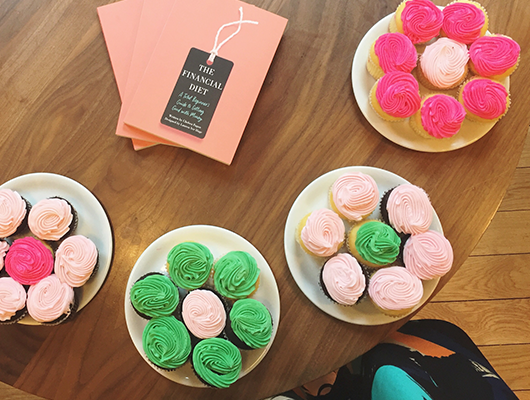 Chelsea is the co-founder of The Financial Diet, a media company for women who want to talk about money. She tweets.