While Thanksgiving is a feast of plenty that sparks gaiety, warm fuzzy vibes, and togetherness, it also adds to America’s massive problem with food waste. According to the Natural Resources Defense Council (NRDC), about 200 million pounds of turkey alone is tossed away during Thanksgiving.

Per the NRDC, that’s a carbon footprint equal to 800,000 cars driving from Florida to Los Angeles. What’s more, you’re bound to have an overage of mashed potatoes, green beans, and other holiday side dishes the morning after.

To cut down on Thanksgiving food waste, I reached out to my fellow frugalistas and money nerds for simple, creative ways on how to make the most of leftovers:

Jim Wang and his family will spatchcock their turkey, meaning they’ll take out the spine from the tail to the neck. The removed spine, along with the ribs and baggie of sweetbreads, will be made into a stock. The Wangs will then use the stock as their soup base to concoct some turkey ramen.

Next, they’ll shred some turkey meat, throw in some scallions and whatever other ingredients make sense along with some noodles. “It makes for a rich bowl of noodles that is completely different from the classic Thanksgiving dinner,” says Wang, the founder of Wallet Hacks.

For as long as I can remember, I would wake up the morning after Thanksgiving to my mom in her kitchen, squatting on the floor and hunched over a portable fryer. Called ruoc ga, which translates to “dried shredded chicken,” you can swap out the chicken for turkey. A traditional Vietnamese dish, ruoc ga can be put on top of salads, mixed with rice porridge for breakfast, or added to white rice and veggies for a simple meal.

You’ll need to shred the turkey, then add fish sauce (soy sauce works too), a bit of pepper, sugar, and a smidge of water. While it typically takes a few hours of tossing the turkey over a fryer (you can also pan-fry or oven-roast it), you can store the ruoc ga in a jar and stick it in the fridge, where it’ll be good for months.

While the traditional shepherd’s pie calls for small cubes of carrots and peas, you can make your own variation using the veggie leftovers, says Andrew Daniels, creator of Family Money Plan. For a strictly veggie shepherd’s pie, think green beans, and autumnal veggies such as sweet potatoes and squash. If you’d like to create a standard meat version, toss in pieces of leftover turkey.

For vegetarians such as Daniella Flores and her wife, who will be dining with their carnivorous relatives, post-Thanksgiving eats might be more savory than the actual feast day itself. The couple enjoys cooking veggie omelets from leftover side dishes.

“Since there are only two of us veggie gals, we cannot wait for a delicious breakfast the day after from the leftovers,” says Flores, who is a senior software engineer and creator of the side hustle site I Like to Dabble.

Take those leftover mashed potatoes and make some potato pancakes, a favorite of freelance writer and designer Bethany McCamish. First, flatten the mashed potatoes, coat them lightly in bread crumbs, and fry them in a pan. You can top with whatever you like — maybe some steamed spinach and mushrooms, for a little green after so much comfort food.

A tradition for R.J. Weiss’s family is making turkey noodle soup with the leftovers. “The bones make a rich broth, and once strained, it’s just a matter of simmering carrots in the broth, adding cooked noodles, leftover turkey, and topping it off with some leftover stuffing,” says Weiss, who is the founder of The Ways to Wealth.

Soup is a great way to use frozen cooked meat since it’ll rehydrate and hide any freezer burn, adds freelance writer Lindsay VanSomeren. Plus. it’s a great dish for the upcoming chilly months! She says: “For the ultra-frugal win, take the entire turkey home with you and use the rest of the bird to make turkey stock.”

Use that leftover turkey to make frozen breakfast burritos. “They’re great for grab-and-go breakfast or lunches, and will help your wallet recover from the holidays by not eating out when you need something quick,” says Kimberly Hamilton, founder of BeWorth Finance.

Just fill a tortilla or wrap with all your favorite toppings, wrap them in a paper towel, and place as many as you can fit into a plastic freezer bag. “When you’re hungry, you simply take out what you need, pop it in the microwave and you’re ready to go,” says Hamilton.

There’s no shortage of ways you can use those turkey leftovers — meat lasagne, or traditional beef chili. It can be as simple as topping your favorite salad with some roasted veggies or bits of turkey. Or play around with traditional meat dishes and see if the meat could be easily swapped with turkey.

For instance, Sarah Li Cain shreds the turkey to turn it into any meat-centric dish — turkey chili, turkey pot pie or any kind of soup. “If I want an easy meal, I stir fry it with a bunch of greens with udon noodles, a splash of soy sauce, slices of garlic and ginger,” says Li Cain, who is a finance writer and host of the Beyond the Dollar podcast.

For further inspiration, scour the accounts of your favorite Instagram foodie influencers or on Pinterest. “Some creativity and searching on Pinterest will take your leftovers from blah to wow,” says Daniels.

Get Creative With Your Sandwiches

Sandwich lovers can go gourmand by using high-quality condiments, fancy cheese, and rolls instead of sliced bread for their turkey sandwiches.

If you have a hankering for a hot sandwich, consider making an open-faced, hot turkey sandwich with your leftovers, says Mike Collins of Wealthy Turtle. Heat up some leftover gravy in a skillet. Then add slices of turkey so they heat up in the gravy. Toast a few slices of your preferred bread, spread a little fresh cranberry sauce on the toast, then pile on loads of warm stuffing. Top it all off with the sliced turkey and plenty of gravy, and you’ve got one delicious sandwich!

Want in on a little secret? Cranberry jelly tastes great on toast. While some people might find it a tad strange, Li Cain makes cranberry jelly and peanut butter sandwiches after Thanksgiving for her husband and son.

After Thanksgiving dinner is over, strategically storing your leftovers will make it easier to cook your meals, points out Logan Allec, founder of Money Done Right. “Put your leftovers in clear containers and label them with what they are and when they should be eaten by.”

So what’s the magic time frame for storing leftovers? The USDA recommends that leftovers be kept in the refrigerator for three to four days. And if you prefer to keep your leftovers in the freezer, they’ll maintain their quality for two to six months.

Try the $5 a Meal Challenge

As you’re already saving money by making the most of your Thanksgiving leftovers, why not turn it into a frugal challenge? See if you can only spend $5 tops on a meal, suggests Erin Chase, founder of $5 Dinners. Whipping up a simple side dish or extra ingredients to your turkey leftovers should make it a cinch. What’s more, shop for on-sale items.

Besides cutting down on food waste, getting inventive with your Thanksgiving leftovers can also help you cut down on your regular food budget. And as the end of the year can be quite expensive, money saved on your grocery bill could go toward your holiday budget. 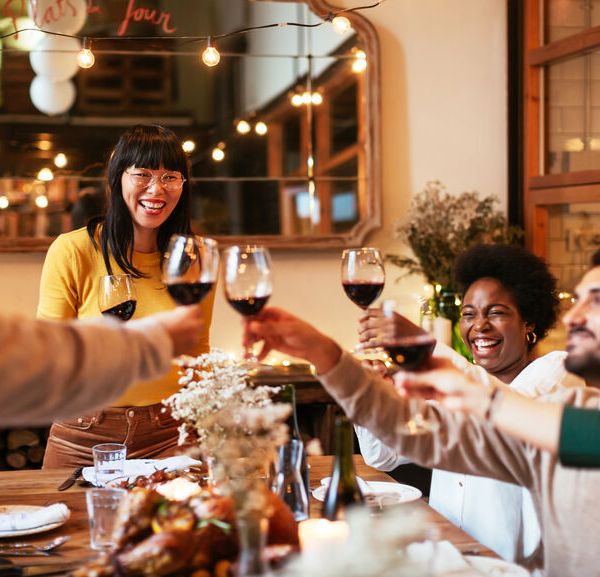 How to Host Friendsgiving on a Budget

The Price You’ll Pay For An Organic Thanksgiving …

How to Fix Thanksgiving Meal Disasters 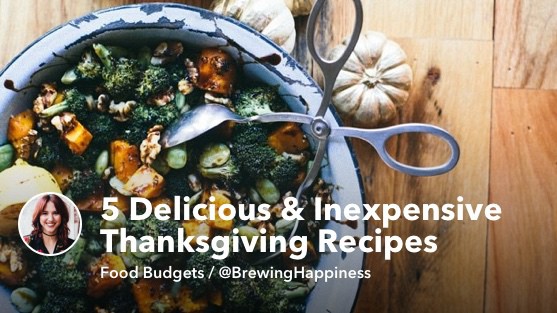 5 Ways to Make it a Delicious (and Inexpensive) Thanksg… 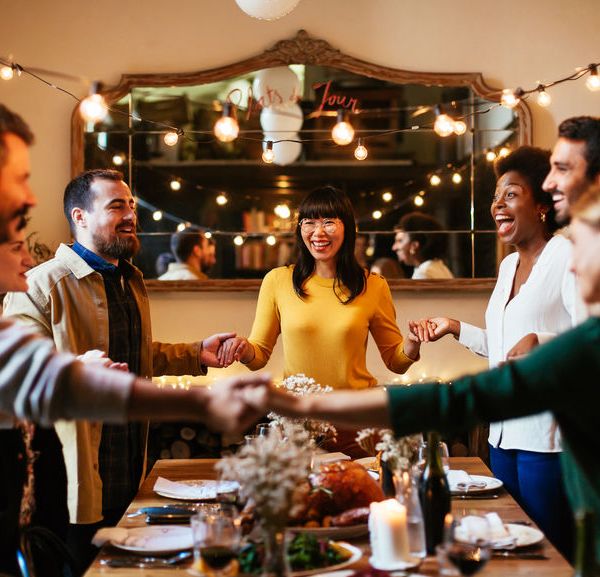 How to Host a Money Stress Free Thanksgiving

Cut Down on Thanksgiving Costs