In recessions and booms alike, stock markets are always at the forefront. Newspapers and financial publications are awash in headlines about the Dow Jones, S&P 500, NASDAQ, rising stock indexes, falling stock indexes, buying, selling, and so forth. And it is tempting to think of a stock market as an impersonal mechanism in the sky, imposing its mandates on us at will.

But this is not actually accurate. In reading the history of stock markets, one discovers that, in the words of economist Thomas Sowell: “markets are as personal as the people in them.” With that said, stock markets and their performance reflect the dominant concerns, fears, and hopes of the investing public. In this post, we will investigate stock exchange history, from the very first stock markets until today.

Stock markets did not begin as the super-sophisticated, simultaneous, worldwide trading exchanges of today. It was not until 1531 when the first institution roughly approximating a stock market emerged, in Antwerp, Belgium. However, rather than buying and selling shares of companies (which did not yet exist), brokers and lenders congregated there to “deal in business, government, and even individual debt issues.”

This changed in the 1600s when Britain, France, and the Netherlands all chartered voyages to the East Indies. Realizing that few explorers could afford conducting an overseas trade voyage, limited liability companies (or LLC’s) were formed to raise money from investors, who received a share of profits commensurate with their investment.

This form of business organization was also necessitated by risk management. The earliest British voyages to the Indian Ocean were unsuccessful, resulting in lost ships and the financier’s personal fortunes being seized by creditors. This led a group of London merchants to form a corporation in September of 1599, which would limit each member’s liability to the amount they personally invested. If the voyage failed, nothing more than this amount could be lawfully seized.

The Queen granted the merchants a fifteen year charter in 1600, dubbing their corporation the “Governor and Company of Merchants of London trading with the East Indies” (or simply, “The East India Company”). The limited liability formula proved successful, leading King James I to grant charters to more trading companies by 1609 and triggering business growth in other ocean-bordering European countries.

The Dutch East India company was actually the first to allow outside investors to purchase shares, entitling them to a fixed percentage of the company’s profits. They were also the first company to issue stocks and bonds to the general public, doing so via the Amsterdam Stock Exchange in 1602.

Looking to learn more about the stock market? Here are a few great places to start:

The first stock exchange in the United States was the Philadelphia Stock Exchange, founded in 1790. Soon after, however, the New York Stock Exchange (abbreviated as NYSE) followed, and quickly rose to prominence. 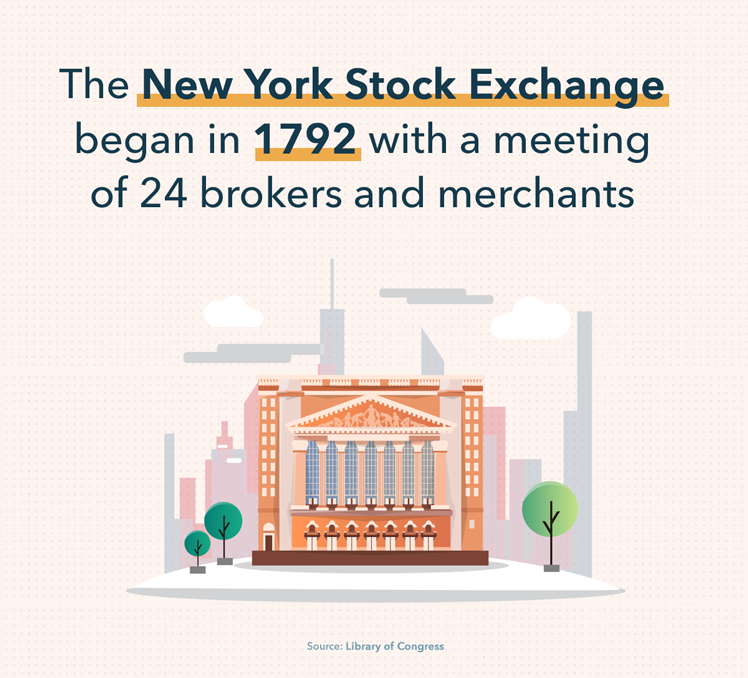 It began in New York City in 1792, just two years after the founding of the Philadelphia Stock Exchange. A group of 24 investors got together in New York on Wall Street. They met under a buttonwood tree and signed the famous Buttonwood Agreement, starting the NYSE. It began with just 5 securities (individual stocks), but rapidly grew as commerce in New York began to expand.

Now, the NYSE is the largest stock exchange in the world, dealing in trillions of dollars every year.

Stock exchange history has been through various highs and lows — though, over the long haul, it tends to trend upward as the world’s economy, population, and productivity increases. That’s not to say that there haven’t been some important lows, however, like the Great Depression of the 1930s, the Recession of 2008, and the 2020 COVID-19 downturn.

While it can be difficult to measure the health of the entire stock market, one way that stock history and markets’ health can be tracked is through a market index. A market index is a collection of companies that are all in a given industry, are of a similar size, or are related in some other way that makes them helpful to track together.

One example you may have heard about simply by watching the news or by looking into investing in stocks for beginners, is the Dow Jones Industrial Average—commonly referred to as simply “the Dow” and abbreviated DJIA. The Dow tracks the performance of 30 large companies in the United States. 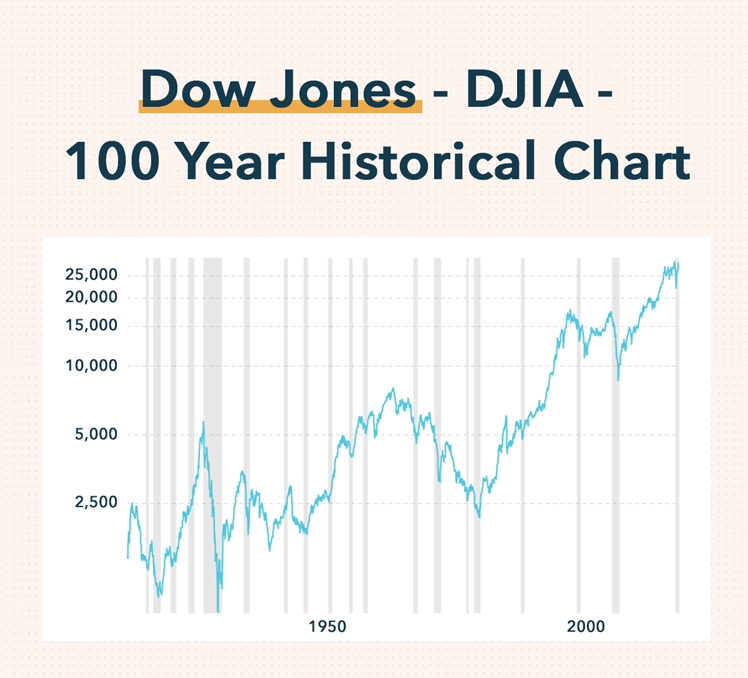 Market indexes are useful because they allow you to easily track how well the stock market is doing at a given time, or which direction it is trending over time. As you can see from the chart above, the stock market has seen some serious peaks and valleys.

However, over time, the long-term stock exchange history has trended upward. What does this mean? When a market index is high, it means that the shares of the companies the index tracks have increased in value on average. A share of a company is a small piece of ownership. When the company becomes more valuable, every piece of the pie does too.

When the economy is growing, jobs are being created, and people have more money to spend. In general, that often leads to individual companies becoming more valuable, as more people have more money to spend on various products, and more businesses are seeking to expand. The result is that the market index tracking those companies will reflect that upturn in the economy — or, oppositely, a downturn, if that happens to be the case.

Why it matters to you

Reading about the stock market and stock history can seem abstract, but stock market background conditions can have real effects that are important to know about when planning your own personal financial wellbeing. Here are just a few reasons why it matters: 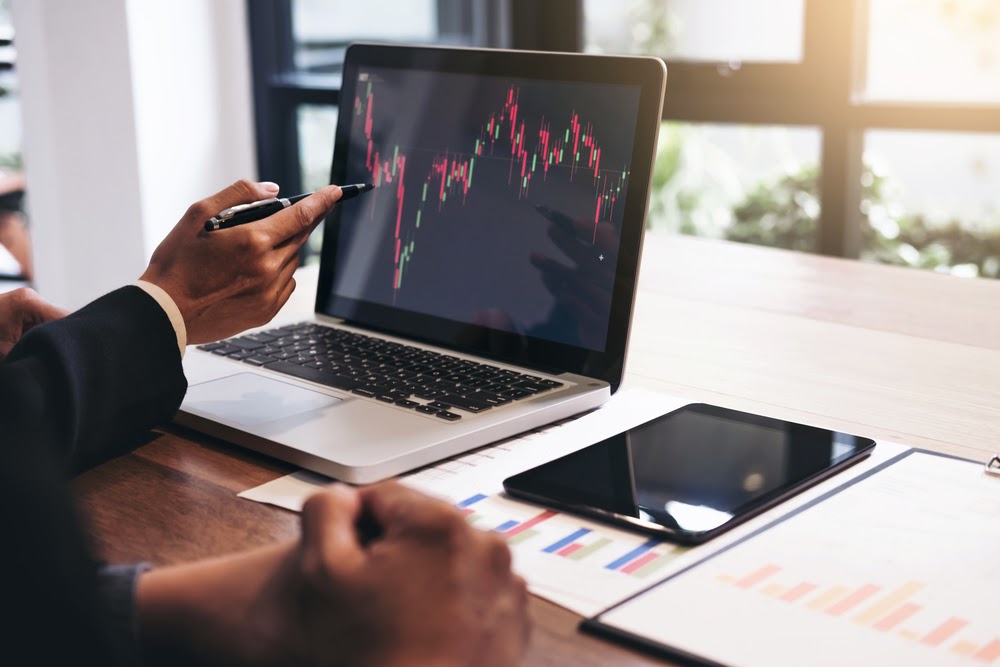 Like many areas of the economy, responsible oversight is necessary to make sure that the stock market doesn’t get out of hand — for example, the 2008 recession was largely caused by the irresponsible actions of investors.

While the exact set of regulations that benefits everyone might not have been arrived at yet, the government has historically attempted to regulate parts of the stock market to keep consumers and investors safe. This began after the Great Depression, which was partly caused by bankers gambling on the stock market with clients’ bank deposits. So, when the markets crashed, individual consumers were hurt, too.

The federal government wanted to keep a disaster like the Depression from happening again, so in response, they passed the Glass-Steagall Act and the Securities and Exchange Act. The former created a barrier between consumer banking and investment banking, and the latter created the Securities and Exchange Commission, or SEC. The SEC’s responsibility is to protect investors from fraudulent or unfair treatment, and continue operating until this day.

Glass-Steagall was partially repealed in 1999. However, recent abuses by the banking and financial sectors (like the 2008 recession) have led to renewed political interest in restoring many of the law’s provisions.

Here’s what to remember about the history of the stock market: