Today more than ever, it’s hard to coordinate a group outing with friends. Schedules are hard to line up, instant entertainment makes leaving the house less appealing than ever and mostly — people just can’t afford it.

You’ve likely felt the stress of being asked to a restaurant only to take a peek at the menu and realize the entrees cost as much as a week’s worth of your groceries. Or perhaps you agreed to a concert with friends before checking the outrageous seat prices. Whether a dinner out, a road trip, or a movie night, many people find themselves roped into unplanned social spending. We wondered if this is because people are simply afraid to talk about their finances with friends.

To answer this, we asked 1,000 Americans whether or not they’ve ever felt embarrassed to tell a friend they can’t afford an activity. Here’s what we found: 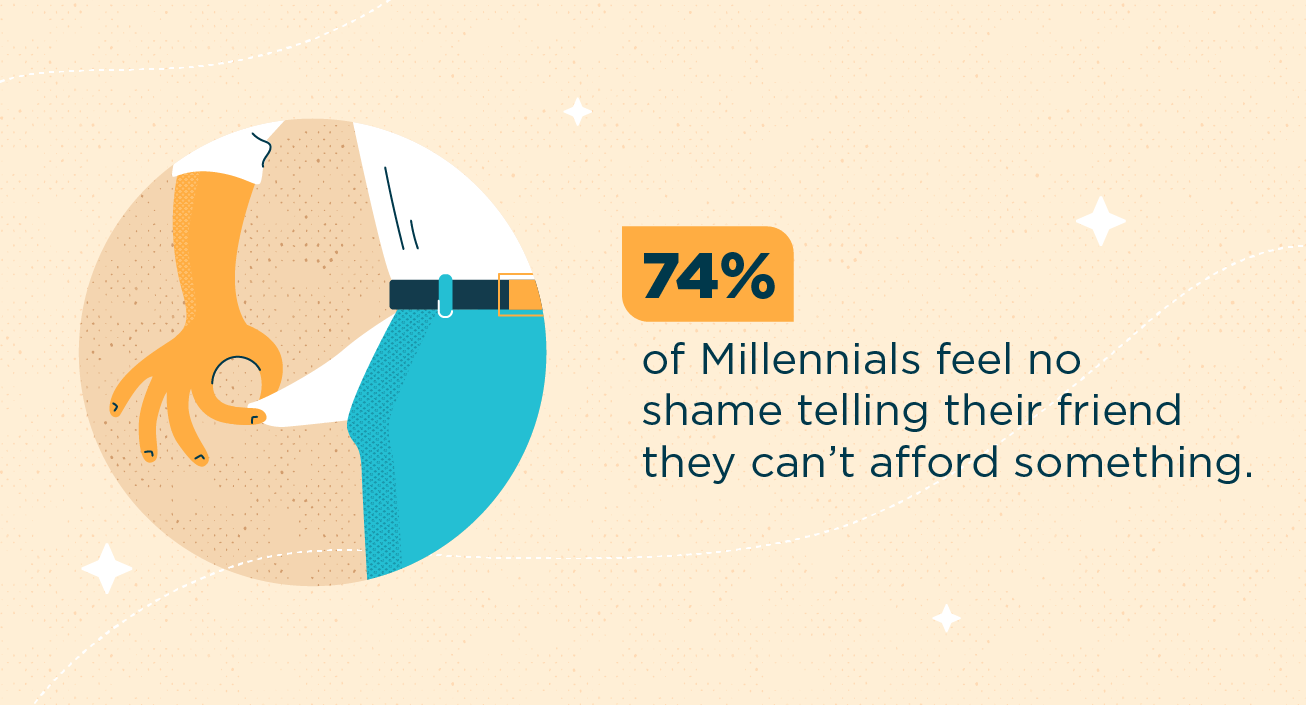 We found that nearly 3 in 4 millennials have never felt embarrassed to tell their friends they don’t have the money for an activity, compared to 41 percent of Baby Boomers. The 55+ age group is 1.6x more likely than their younger counterparts to feel uncomfortable confessing their lack of funds.

Though millennials may not be overspending to avoid a conversation, 40 percent of millennials still report overspending to keep up with friends. There is a social element that motivates younger generations to make purchases based on what their friends are doing. A powerful motivating factor in overspending is the fear of missing out, or FOMO, which is often emphasized through posts on social media.

So despite most people seeming open to having a conversation about realistic spending, they continue to spend too much because of their friends. People are still overspending to keep up, even though it’s clear their friends would understand if they couldn’t. That may be because it isn’t about the relationship they have with their friends at all — its about their relationship with social media. 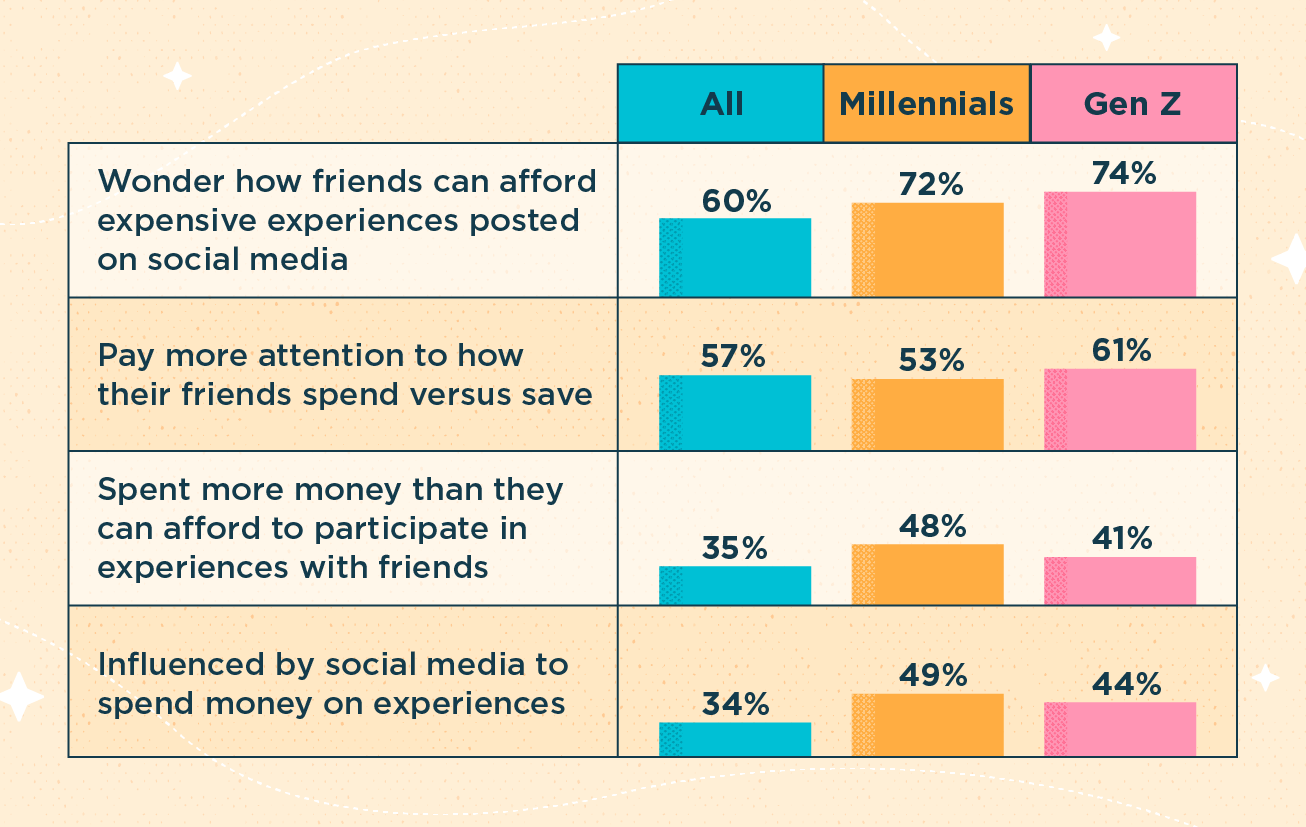 The need to have what others do is human, yet it drives so much of our lives and can land many people in hot water financially. Whether you find yourself impulse-buying from an Instagram influencer or heading to the restaurant your friends insisted you try, you wonder: How can you get a handle on FOMO spending? Here are some quick tips:

Limit your social media: It may be hard to hear, but the simple truth is that you can’t miss what you don’t know about. A simple test for your relationship with social media is this: scroll for 20 minutes and ask yourself how you feel. If the answer is tense, jealous, or self-conscious — it’s time to revamp your relationship with that platform. Try muting accounts that make you feel bad about yourself and follow people and artists who inspire you instead. Social media is a tool, not a ball and chain.

Plan free activities: If you’re part of the 32 percent that winces at the idea of admitting your budget is tight, take the plans into your own hands. While being open with your friends is the best policy, it also helps to set up activities that don’t cost a thing. Try a movie night in, a group potluck, or a boardgame night.

Get to know your budget: While it may feel like what you don’t know can’t hurt you, when it comes to finances thats absolutely false. Take time to assess your monthly expenses and income to determine how much you can truly afford to spend. Once you’ve figured out your limit, there’s no need to stress about the splurge within your budget, and no need to break the budget you spent so much time creating. 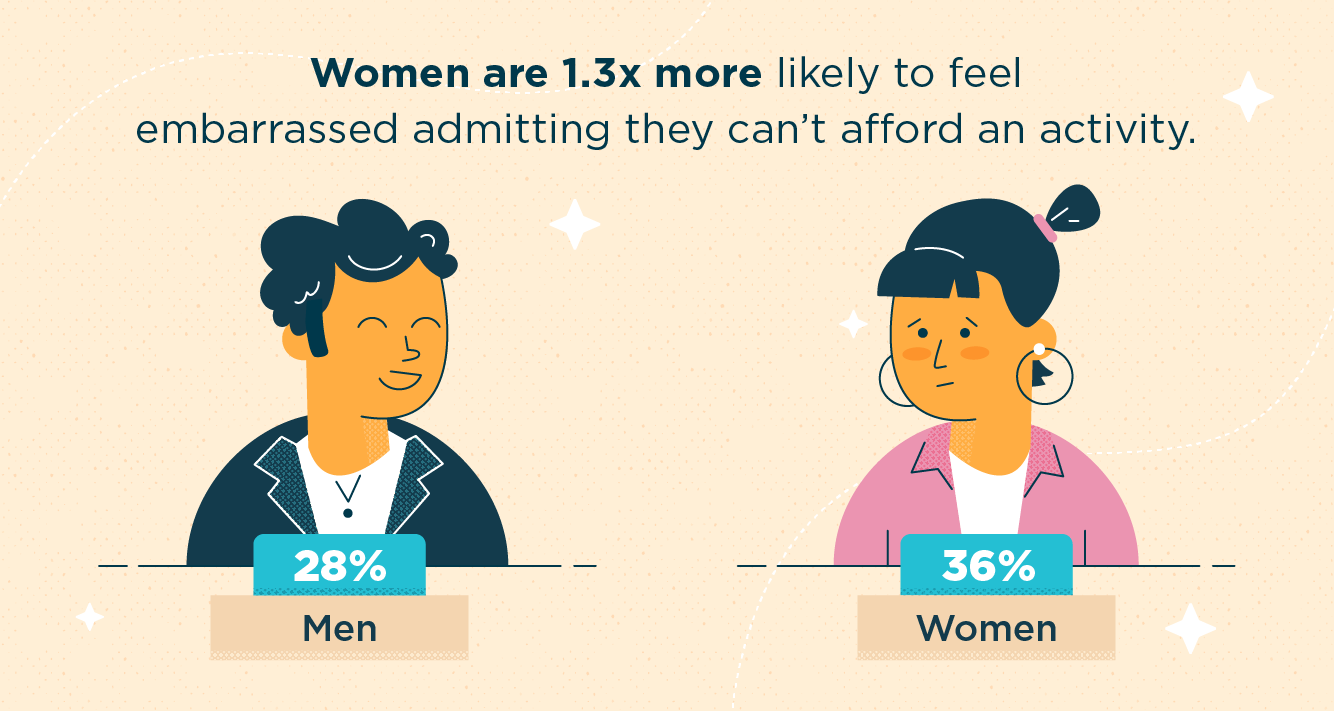 More than 1 in 3 women say they have felt embarrassed to admit they can’t afford an activity, while closer to 1 in 4 men can say the same. This may come as a bit of a surprise since many might consider the man the traditional breadwinner. Yet studies have shown that women are less comfortable talking finances overall, with a whopping 80 percent admitting to refraining from discussing finances with their friends and family. 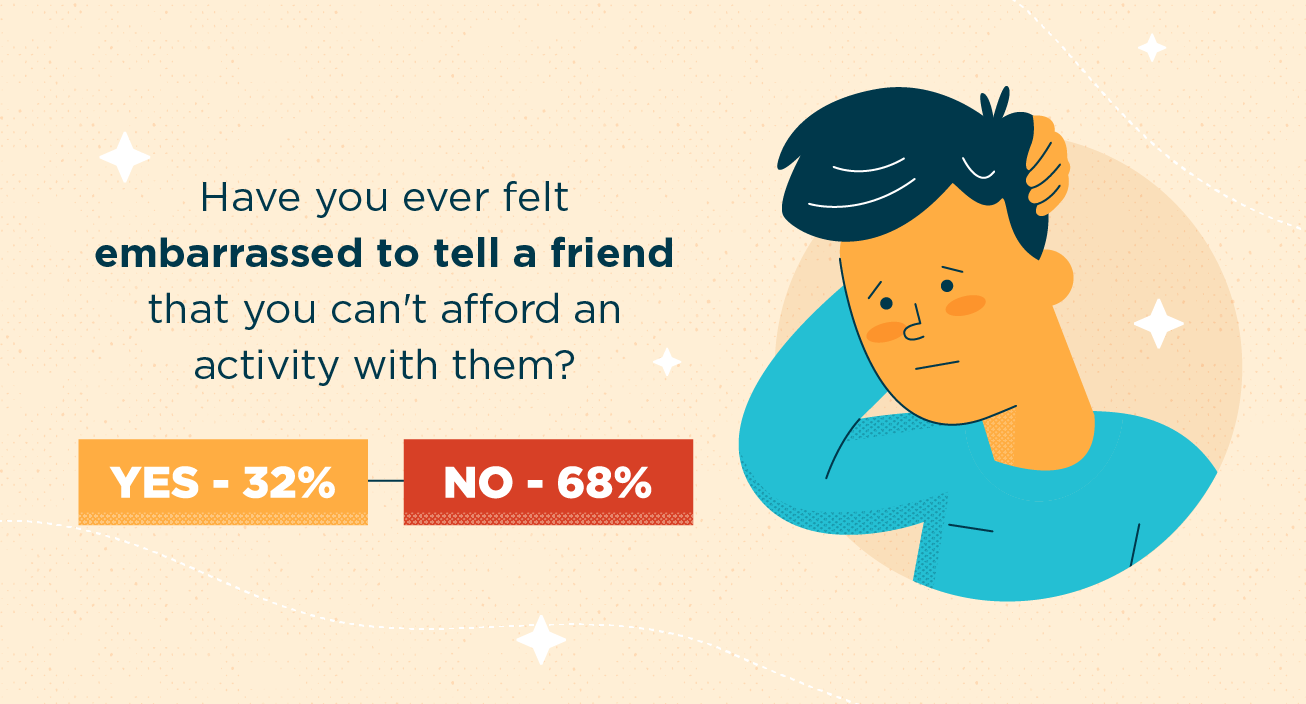 68 percent Americans we polled have never felt embarrassed admitting to their friends that they can’t afford to do an activity with them. This is surprising because in recent study, 57 percent of Americans said they avoid talking about finances with friends. It may be that with 44.7 million people carrying student loan debt and the cost of living higher than ever, it’s more socially acceptable to admit a lack of finances than to inadvertently brag about how much you have.

This study consisted of one question conducted using Google Surveys. The sample consisted of no less than 1,000 completed responses per question. Post-stratification weighting has been applied to ensure an accurate and reliable representation of the total population. The survey ran between October 14th–October 16th, 2019.