Whether you’ve been planning your costume since November of last year, or you’re renting a last-minute get-up, we know doing Halloween right can take a lot of effort — and money. If it feels like each year you spend more on Halloween, you aren’t alone. Halloween retail spending increases each year, and last year the total reached a remarkable $9 billion for the holiday.

Where does all that money go? American consumers prioritize their costumes — spending around $3.2 billion last year on outfits. The next largest expenses during this scary season are decorations, candy, and greeting cards.

Across the U.S. there are a few places that commit to Halloween like no other. To determine which U.S. cities do the most for Halloween (and where you’ll likely want to celebrate!), we analyzed data on the number of costume shops, haunted houses, events, candy spending, and party supply stores across 200 of the most populous cities.

Here are some key takeaways:

Let’s take a look at the winners: 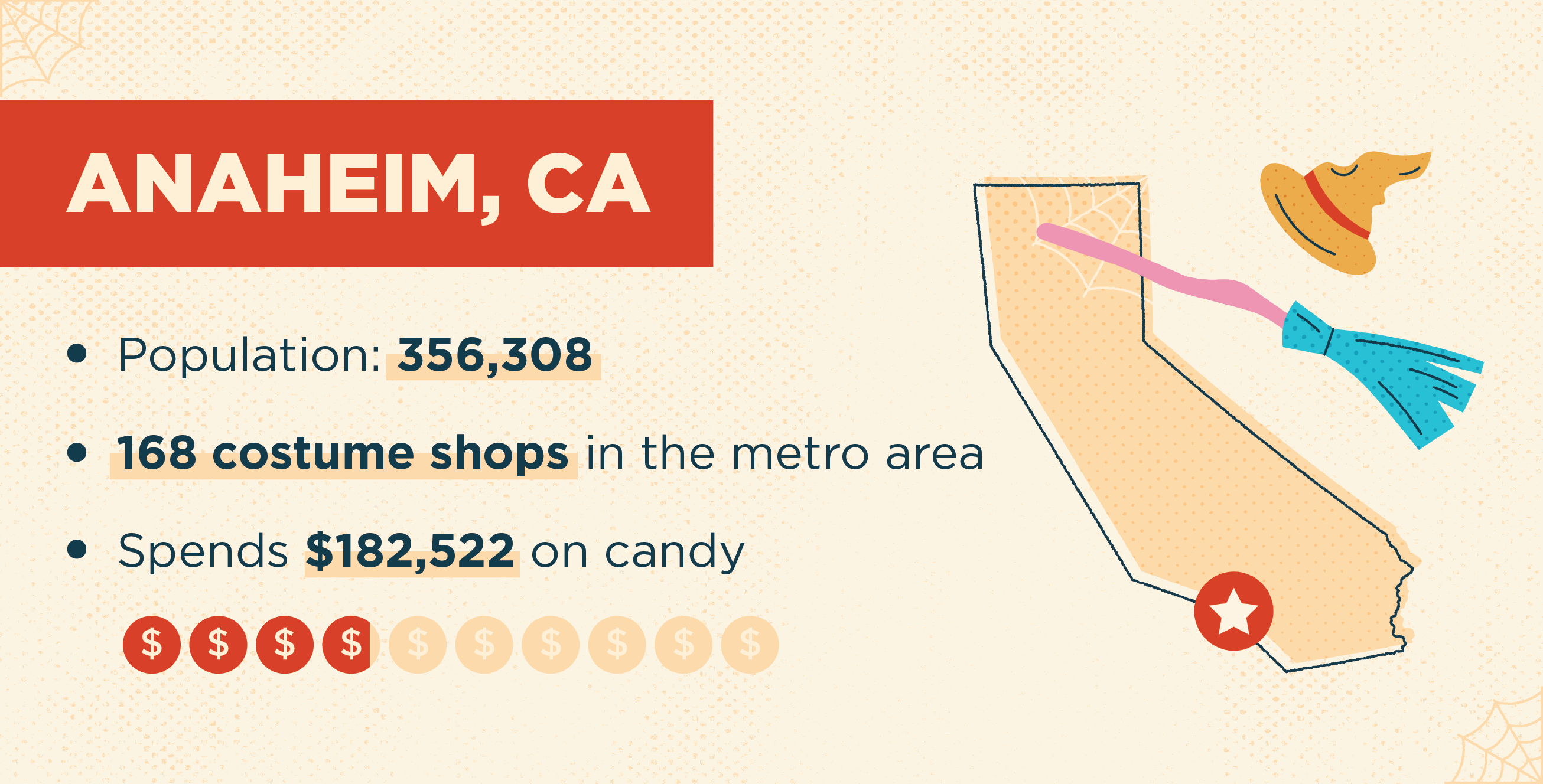 Just 26 miles southeast of Los Angeles is the best city to spend Halloween: Anaheim. With the highest number of costume shops per capita on our entire list (168 total!), it’s no surprise this city comes in first. Home to Disneyland, it’s residents are no strangers to extravagant Halloween celebrations and over-the-top costumes.

Anaheim also boasts one of the largest Halloween parades in the country, which has been around since 1924 and has hosted stars like Babe Ruth and Walter Johnson. The parade is a part of the city’s annual Fall Festival, and features a “Pawrade” just for pets! 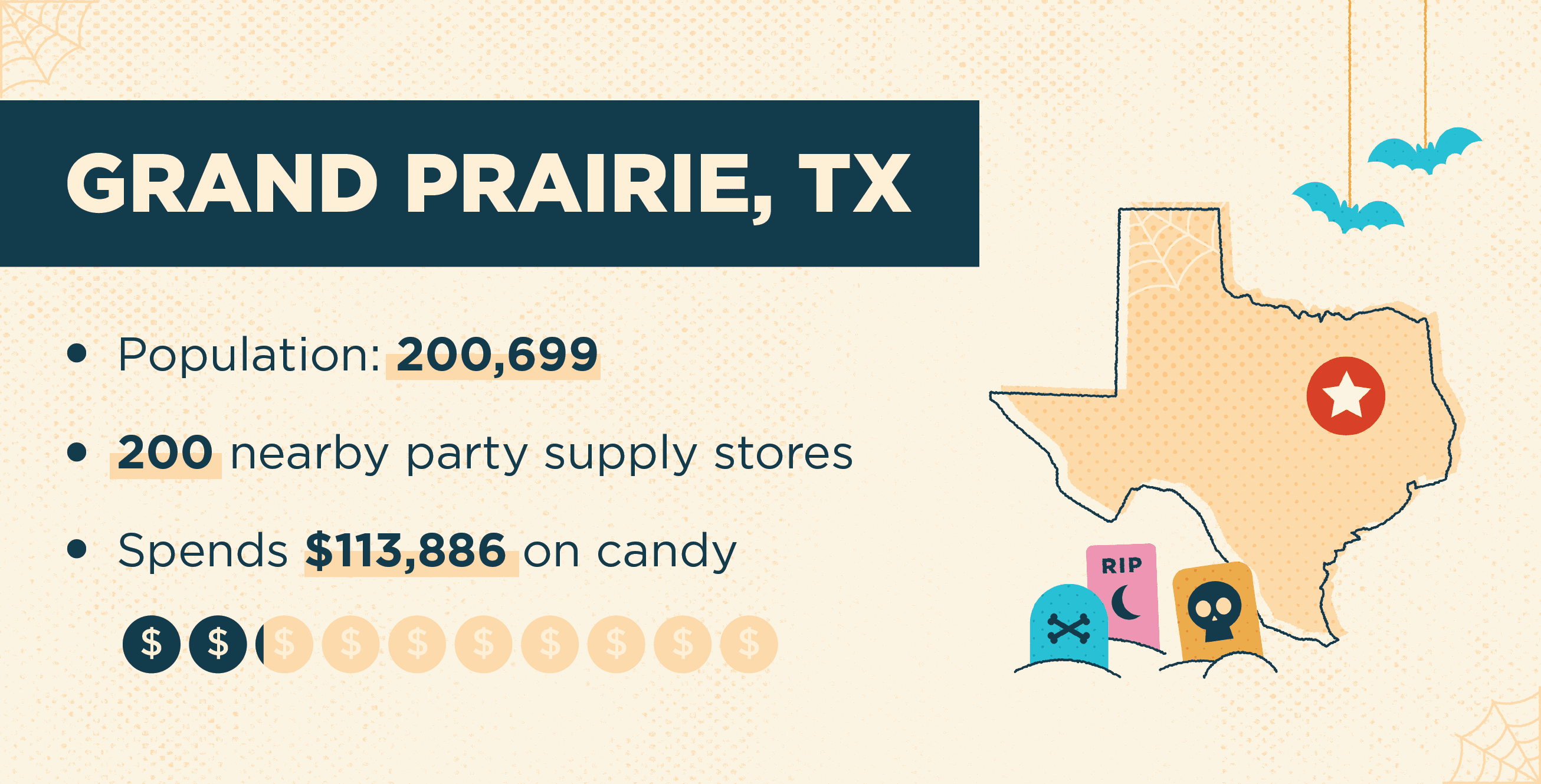 The Lone Star State hosts our number two city with the ritziest Halloween celebrations: Grand Prairie. Not far from Dallas, this sprawling suburb is actually in three different counties and is considered a suburb of both Dallas and Fort Worth. Grand Prairie climbs to the top of our list with its 57 costume shops for only 200,699 people.

Looking for a spooky Halloween activity in Grand Prairie? Stop by Louis Tussaud’s Palace of Wax. Their wax replicas of famous celebrities are as eerie as they are impressive. 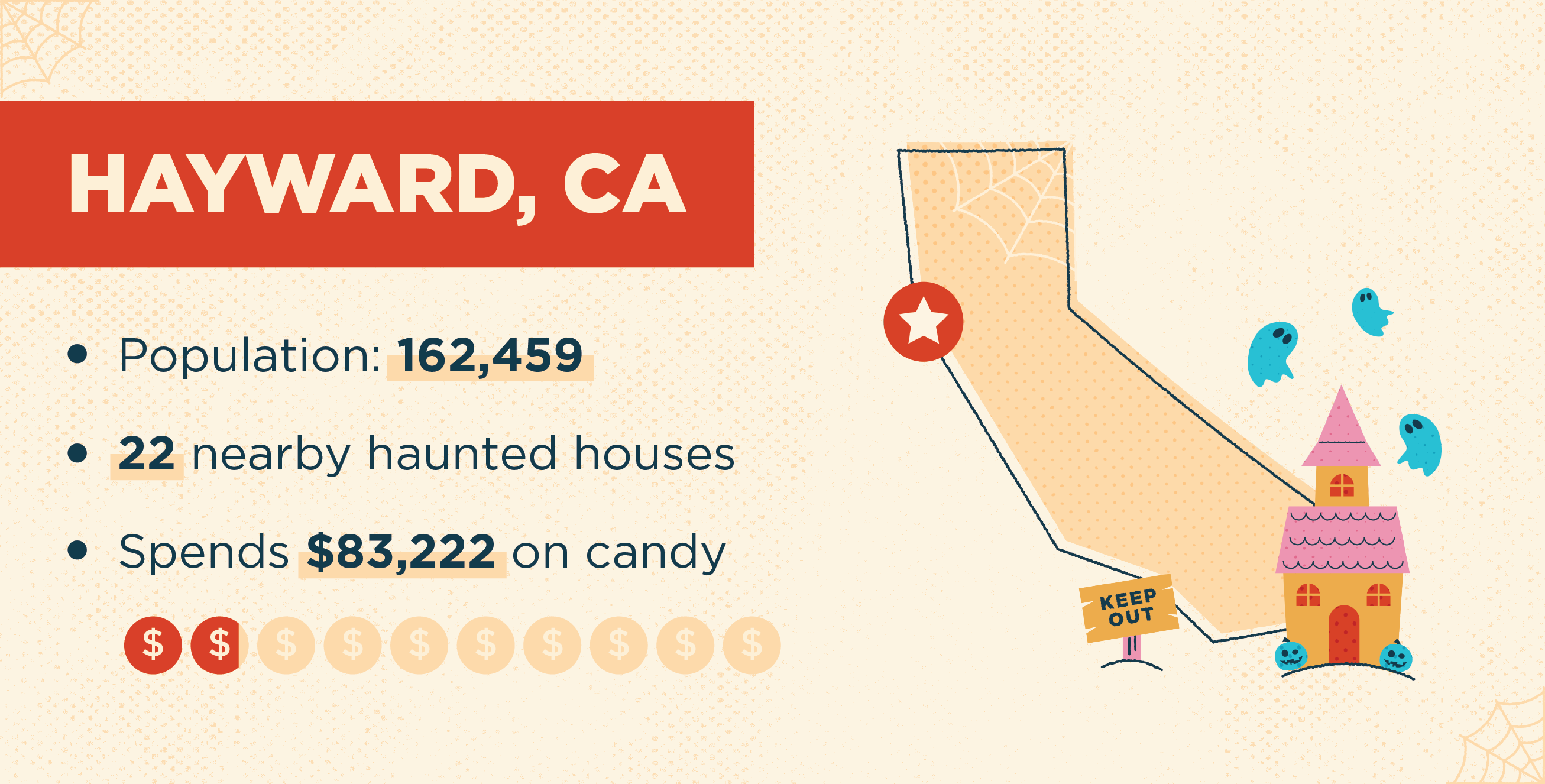 Sitting on the San Francisco Bay, the city of Hayward offers a scenic location to spend Halloween. While Hayward is home to a number of Halloween activities, the area it ranks highest on our list is the number of official haunted houses held each season.

With a long history and a few tragic earthquakes in it’s past, Hayward has its own collection of unofficial haunted locations, including the Hayward Plunge. The old swimming spot is rumored to be haunted by the ghosts of two murdered boys. Whether you prefer jump-scares or scary stories, you’re sure to find a good haunt in Hayward. 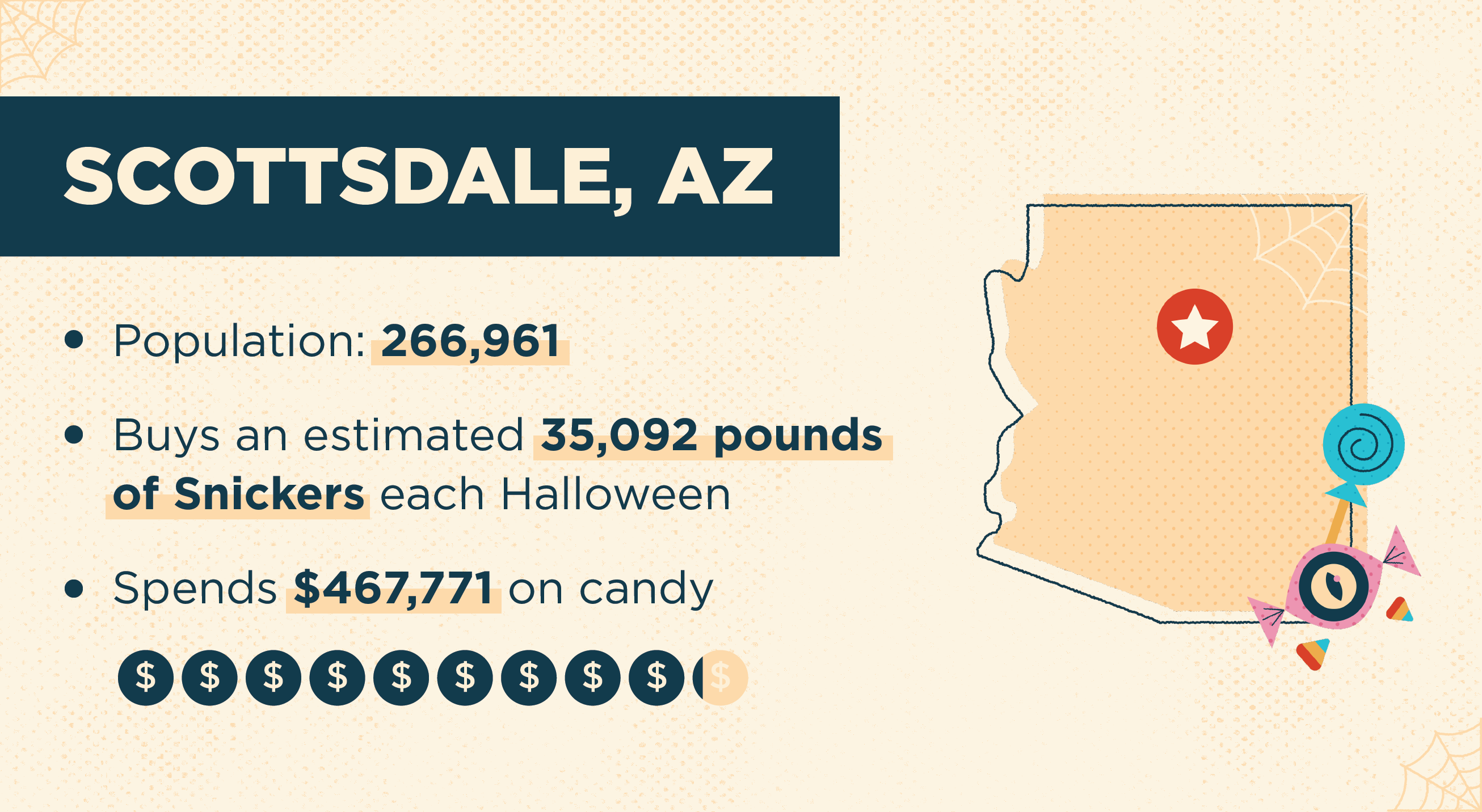 In the dry state of Arizona is our fourth most Halloween-Happy city. While temperatures in October still get up to 86 degrees, this doesn’t stop the people of Scottdale from celebrating in style.

Scottsdale residents have bragging rights for consuming the most candy on our list, spending an estimated $467,771 on their top three sweet treats each Halloween. The residents of Scottsdale like their chocolate and their heat, as the favorite candies in this state are Snickers, Hot Tamales, and Hershey’s Kisses. 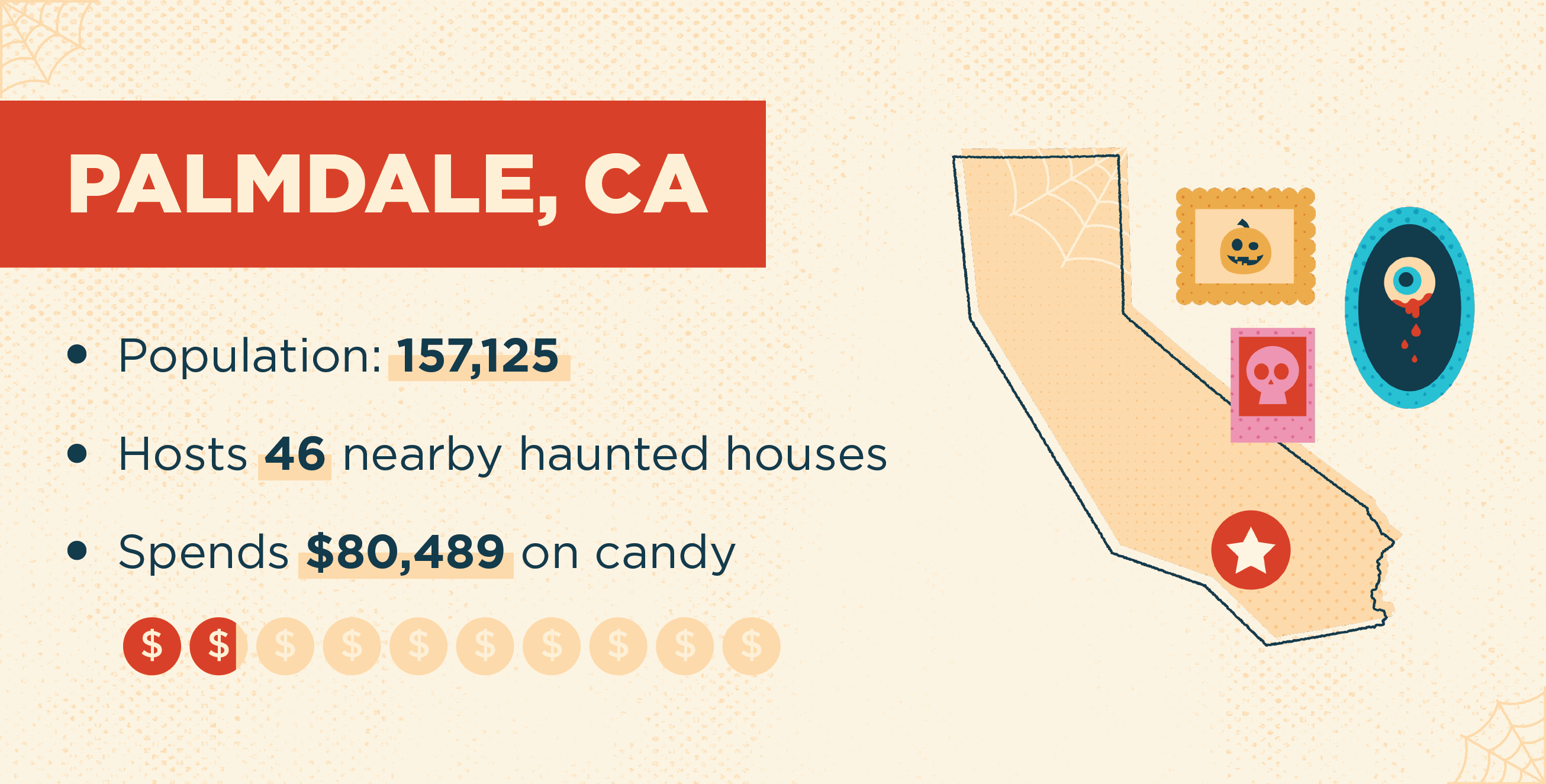 The next city on our list is also in the sunshine state, located in a valley in Southern California. Don’t let the cheery daytime views in Palmdale fool you — this town loves a good scare. The tranquil valley has a whopping 46 haunted houses in its midst, meaning there are more haunted houses per capita in Palmdale than any other on our list.

Due to its proximity to Hollywood and dramatic desert scenery, Palmdale has been used as a location for a number of movies, including the air traffic control scene from Steve Spielberg’s Close Encounters of the Third Kind. 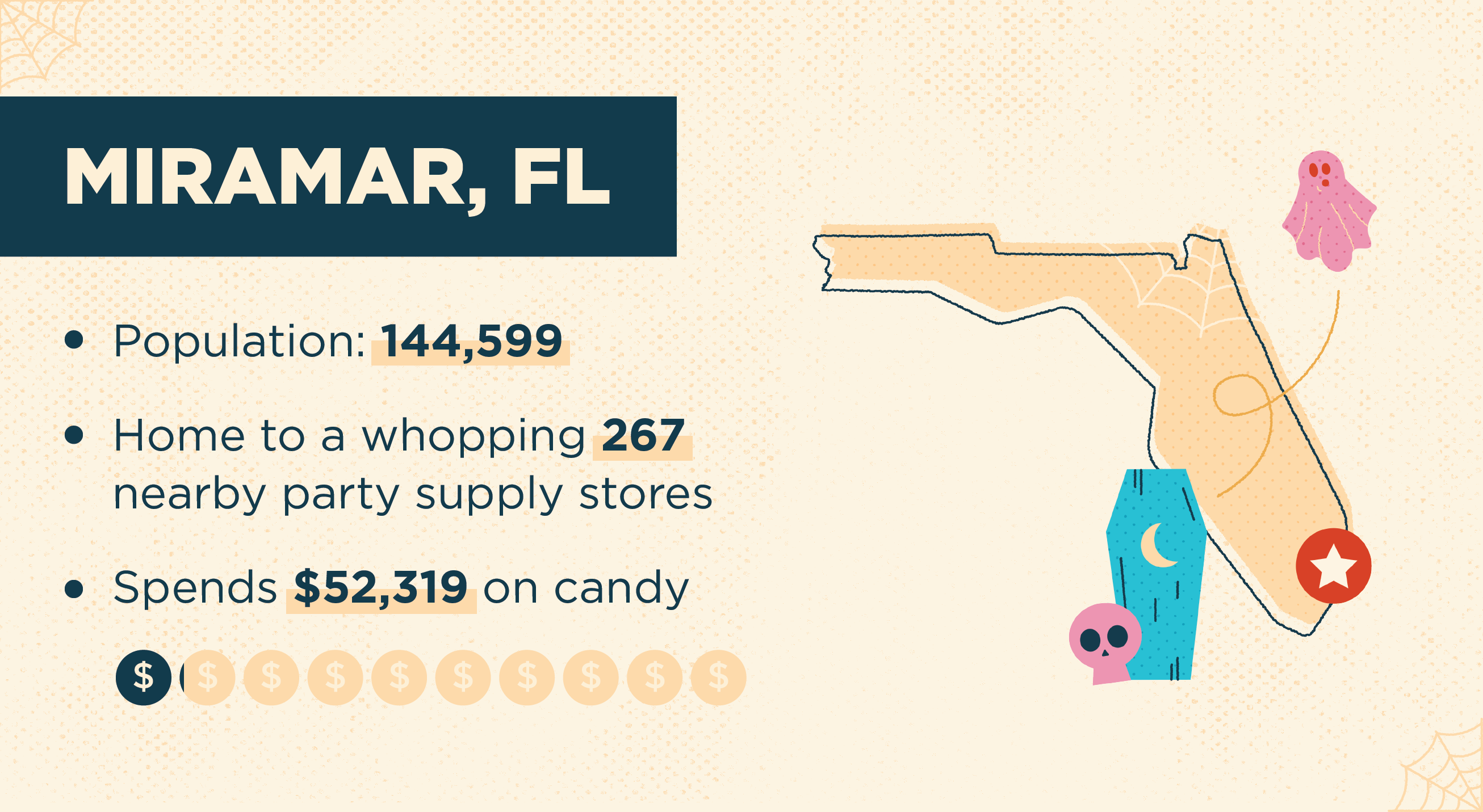 Across the country is Miramar, a suburb of the Miami metropolitan area. Despite its smaller size, Miramar still can still brag about the 45 costume shops available to its citizens. Yet, the people of Miramar don’t seek out the scares that other cities on the list do, only offering 5 haunted houses in the area.

That doesn’t mean Miramar doesn’t have something to offer for those looking for a good spook. Some say that the Snake Warrior’s Island Natural Area is haunted, with stories of mysterious lights and apparitions that go back to the 1800s. It is sometimes said that an old hermit who used to live on the island in the 20s still walks the grounds.

As the second-most populous city in the state of New Jersey, this town is overflowing with fun things to do on Halloween. Jersey City offers more Halloween events than any other city on our list and it’s not hard to see why: the median age for the city is lower than the national average at just 33.2 years old. Plus, the city is just a short distance from the city that never sleeps — New York.

Being on the East Coast means Jersey City has some old (and possibly haunted) houses that the West Coast can’t offer. The Newkirk house is the oldest in the city, having been built in 1690, just 83 years after the very first colony in America. For more to do in the city, take a stroll along the Hudson River Waterfront Walkway, which can make for an eerie outing at night. 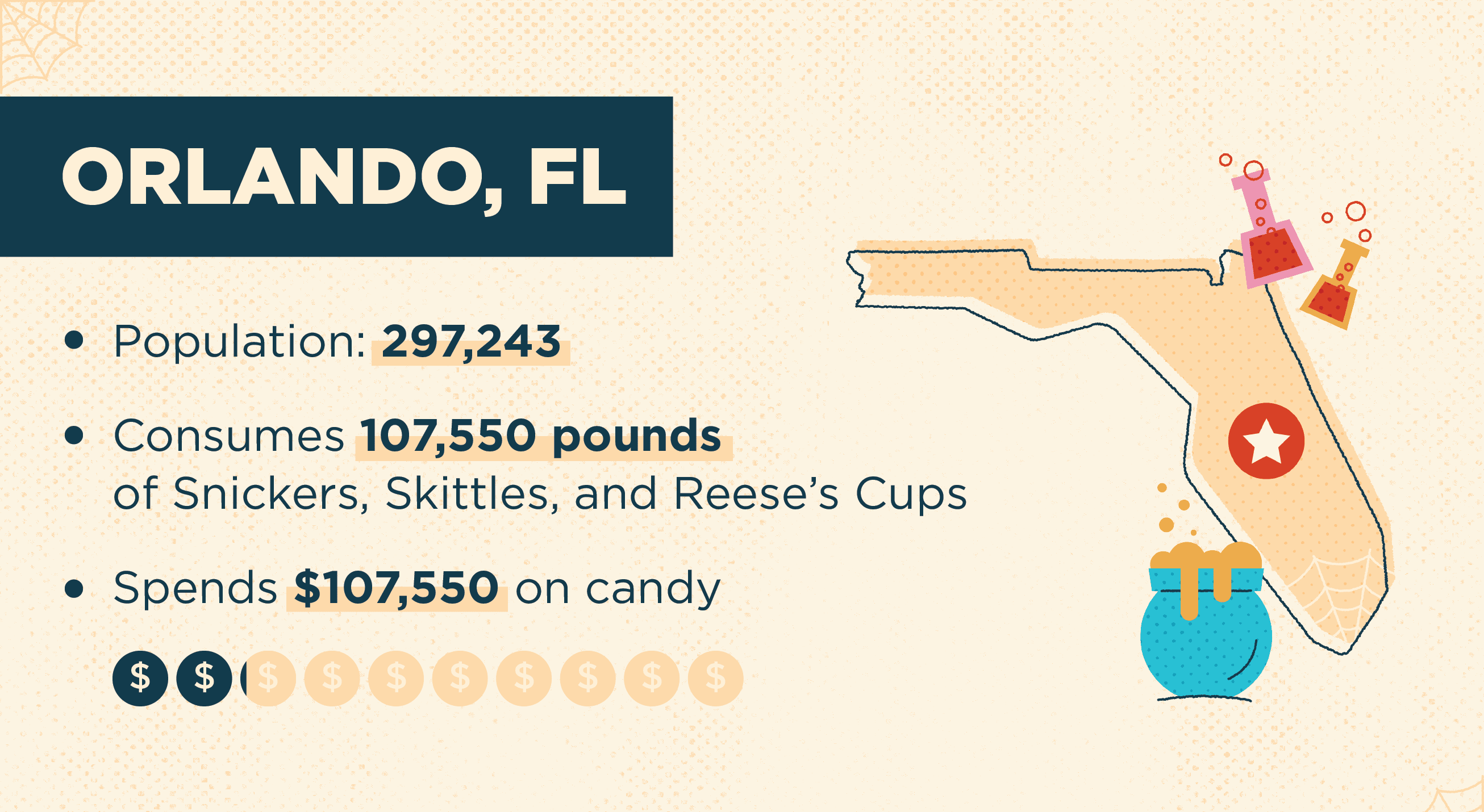 The home to the Happiest Place on Earth may also be one of the spookiest. Coming in at number 8 on our list is Orlando. While the city doesn’t offer as much to on Halloween as some of the others on the list, it still offers an extravagant experience with Disneyworld’s yearly Halloween-themed transformation.

Since the famed theme park is many people’s favorite place, this means that they have a problem with people wanting to make the location their final resting place. Reportedly custodians frequently deal with people spreading the ashes of loved ones around the park.

Whether you want to have the time of your life or delve into the spookier side of Halloween, Orlando is a good place to check out. 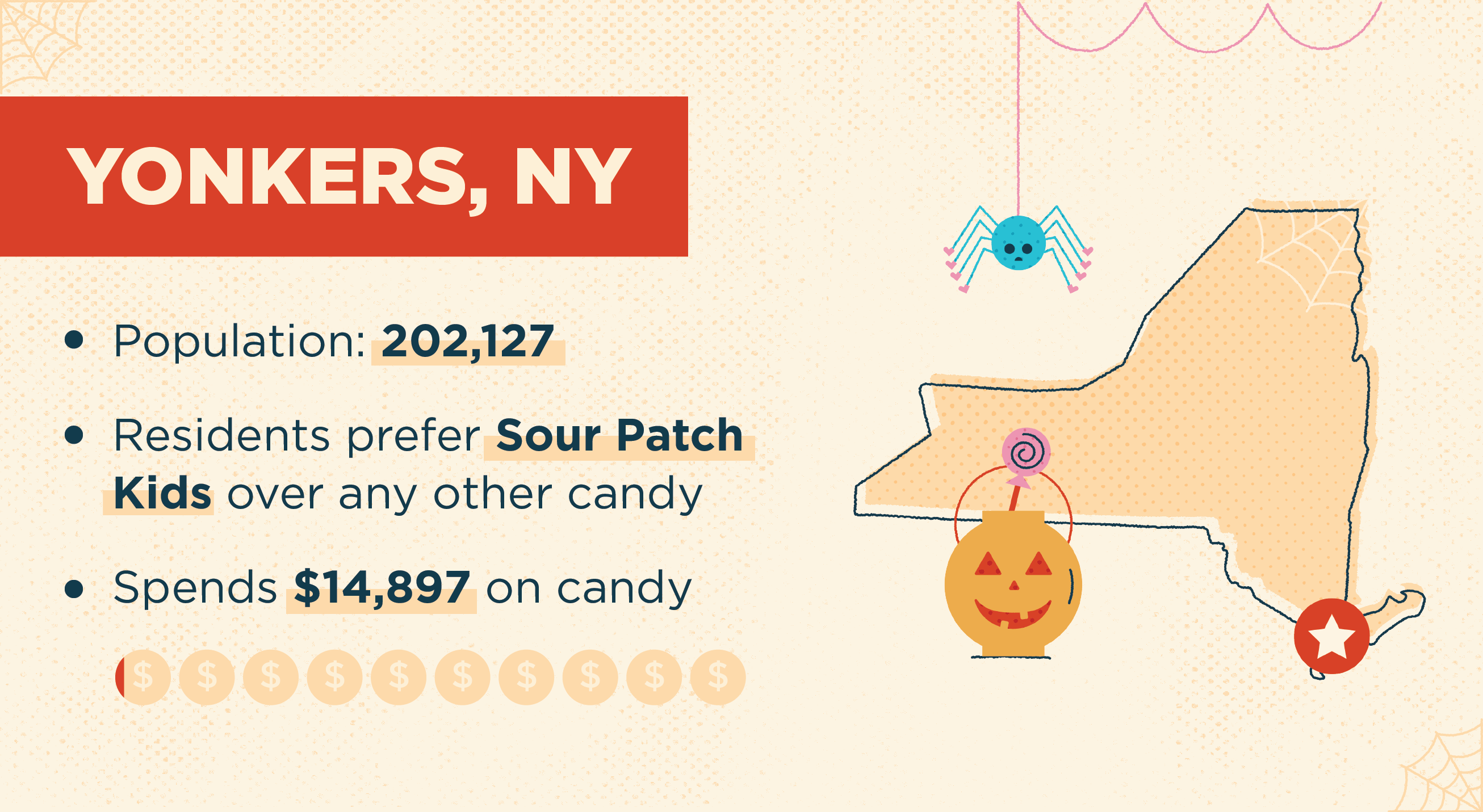 Just up the Hudson from the Big Apple is a lesser-known city that likes Halloween even more. Yonkers’ proximity to New York City means its residents can take advantage of the many nearby events —960 to be exact —when planning their Halloween activities. Yonkers also has 92 nearby party supply stores and 29 nearby haunted houses.

Though not the scariest of towns on our list, there’s still plenty of spooky things to find. For a fun-filled fall activity near Yonkers, check out the Great Jack-O-Lantern Blaze, where more than 7,000 carved pumpkins will be lit and put on display.

Fun fact: if you’ve ever been frightened of elevators, you have Yonkers-based inventor Elisha Otis is to blame. Though not the scariest of towns on our list, there’s still plenty of spooky things to find. 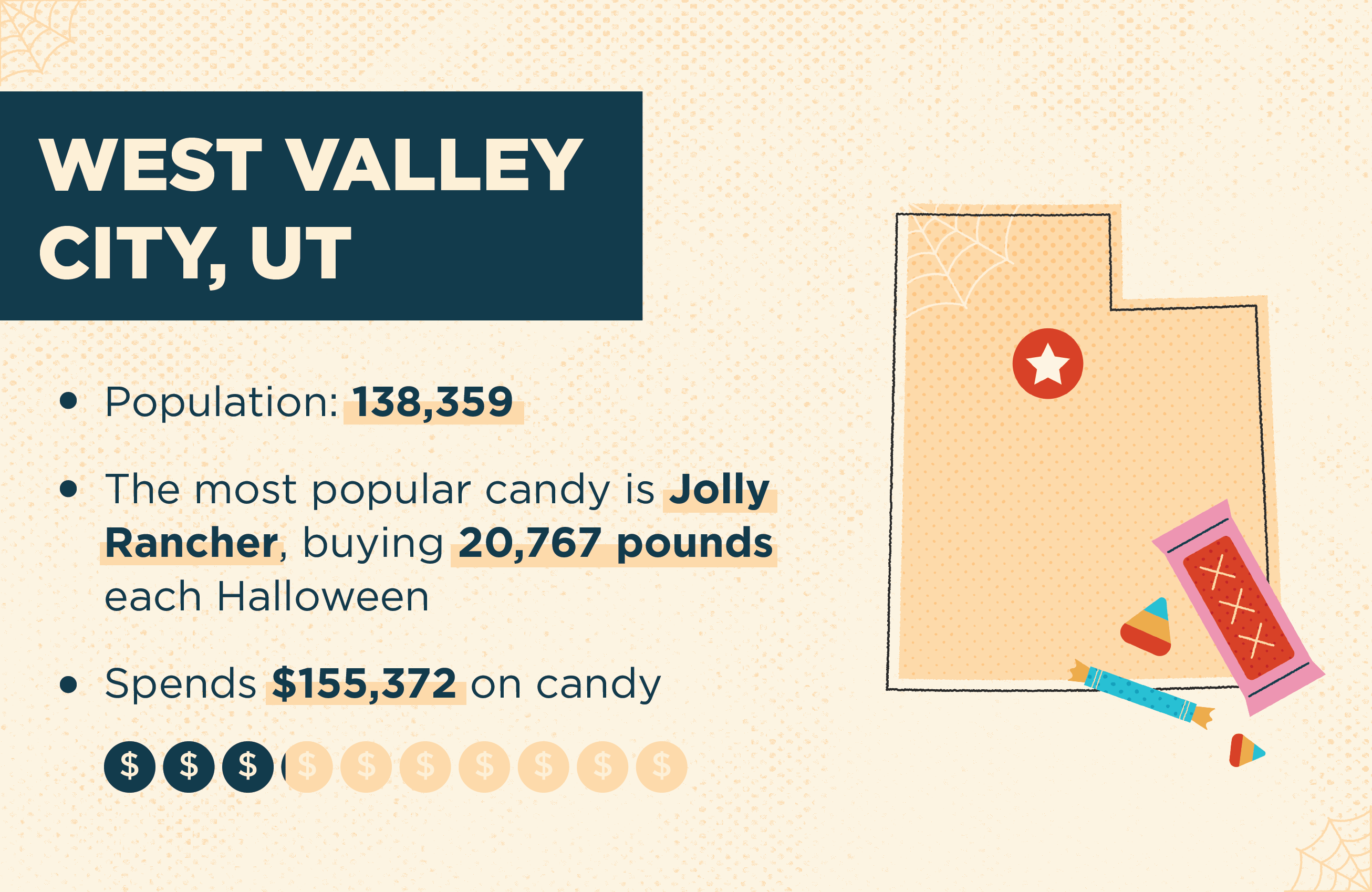 West Valley City may be the smallest on our list, but its residents show up for Halloween. With a total of 35 party supply stores and 60 Halloween events in October, the city offers a respectable number of things to do for any Halloween enthusiast.

West Valley City is not far from Salt Lake City, which is sometimes known as the “Crossroads of the West” for being at the center of the Western United States. It is also known as one of the largest industrial banking centers. While not scary in the traditional sense, for anyone who’s ever taken out a student loan, you know financial institutions can be one of the most frightening things.

While the cities listed above truly value Halloween — as seen by the number of costume shops, haunted houses, and festivals they offer — we also wanted to take a look at which cities actually spend the most on Halloween candy. Check out the list below to see which places go above and beyond when it comes to purchasing sugary treats! 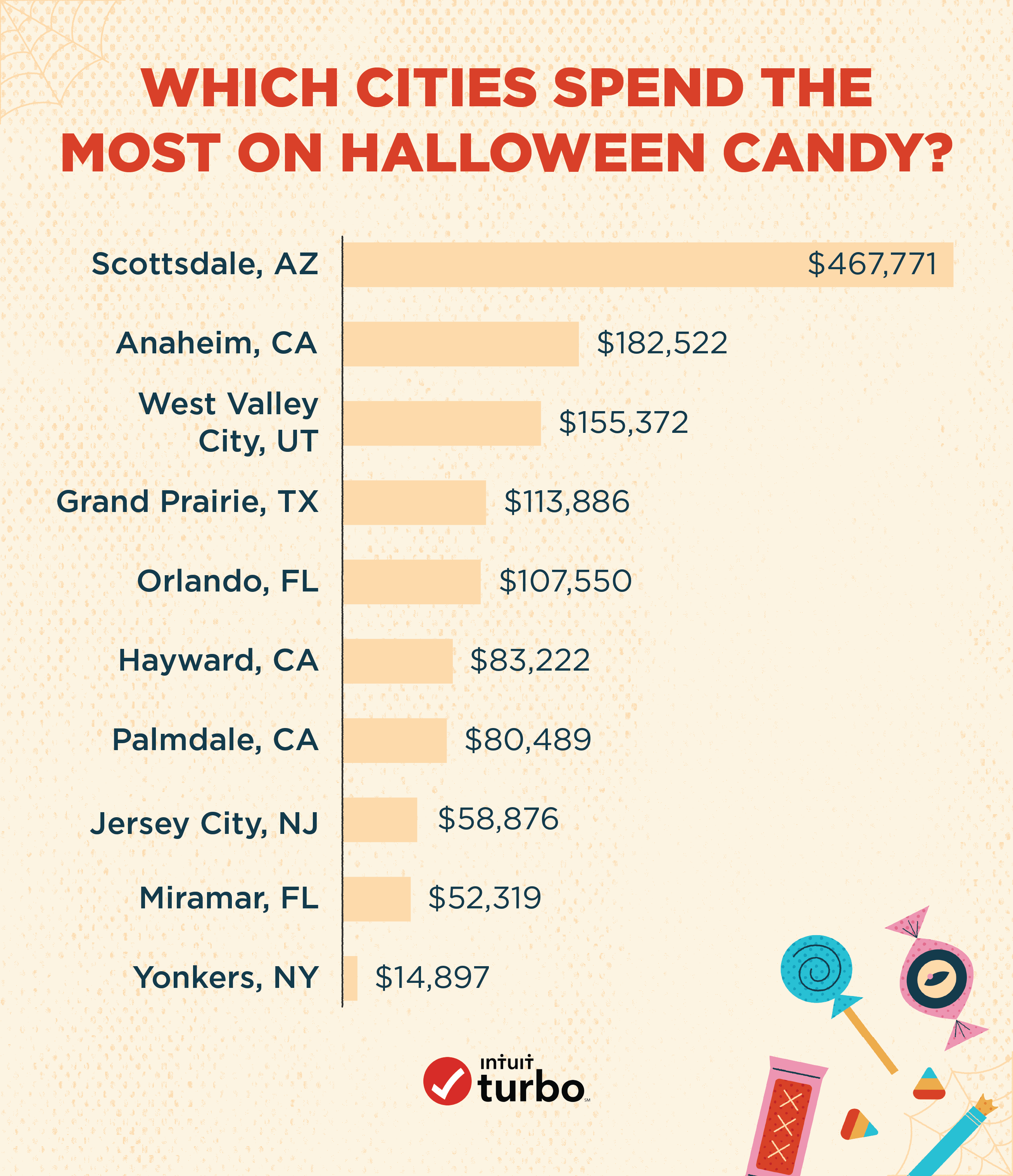 Whether out in the swampy grasslands of Florida or nestled in a quiet valley in California, the bottom line is America loves Halloween — and spends a lot of money celebrating it. Across all 200 cities, there was only one that didn’t have a costume shop and only nine that didn’t have a haunted house.

The popularity of the holiday may be because, for one night, our fears and anxieties are allowed to be masks that don’t seem quite as scary. Instead, we’re allowed to celebrate the sweet moments in our lives and share them with our neighbors. So even if your city didn’t make the list, your town is still likely to have more than enough Halloween spirit to celebrate in style.

Turbo compiled five data points on a list of 200 most populous cities in the U.S. Our sample did not include cities in the same metropolitan area.

The data points were weighted as follows:

We pulled our data from Yelp, Eventbrite, and the CandyStore. The spending on each candy in a state was found by multiplying the average price per pound of a particular candy with the pounds that state consumes. Then, the spending on the top three candies was totaled. The population of the city was used to determine the percentage of each city’s spending.