MintLife Blog > Money & Relationships > What Is the Pink Tax? Why Women Pay More For The Same Stuff

The pink tax refers to the trend where women pay more for the same products as men. If you’ve ever comparison-shopped in the deodorant aisle, you may have encountered a strange price disparity. Products like razors, toothbrushes, and even prescription drugs marketed towards women all tend to cost more, for no discernible reason other than the fact that they’re pink.

It isn’t just items you can pick up at the store that women pay more for, either. Women are often charged more for mortgages, car loans, and services like dry cleaning. Women also tend to receive less funding when starting a business. Across many industries, women pay more than men 42 percent of the time.

Compounded with the fact that women often make less than men, and their overall wealth is just 32 cents to every man’s dollar, their purchasing power is greatly reduced.

Whether it’s a trip to the store, or a major financial decision, it’s critical to understand what you’re really paying for — and if you’re actually getting the deal you deserve. Keep reading for insights on the pink tax, or skip to the infographic below.

What Is the Pink Tax? 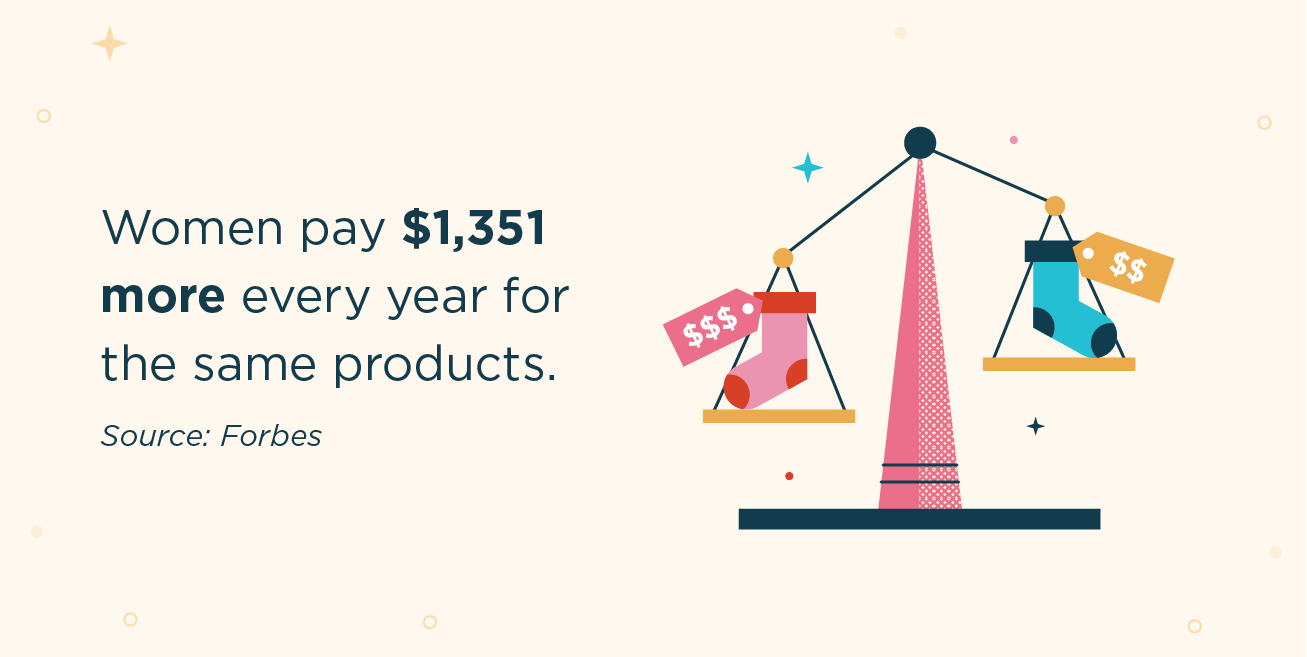 The pink tax refers to gender-based pricing, where women pay more for items marketed towards them, while comparable products marketed towards men are often cheaper. It does not usually refer to an actual tax placed on women’s products. The exception to this is when talking about the sales tax placed on feminine hygiene products. This is because they are categorized as luxuries rather than necessities, which some argue should not be the case.

For example, if you were to pick up a men and women’s razor in the personal care aisle at the store, The New York City Department of Consumer Affairs found that a pack of women’s razors would cost an average of $8.90, while the men’s would only cost $7.99. That’s an 11 percent difference that adds up — and the pattern continues across more than just personal care products. The organization found that clothes, children’s toys, and home care goods were more expensive, too. Across all products, women pay 7 percent more on average. This pricing disparity results in women paying $1,351 more every year for the same products as men.

The gendered pricing carries over to large ticket items as well. When shopping for cars and homes, women are more likely to pay more than men: 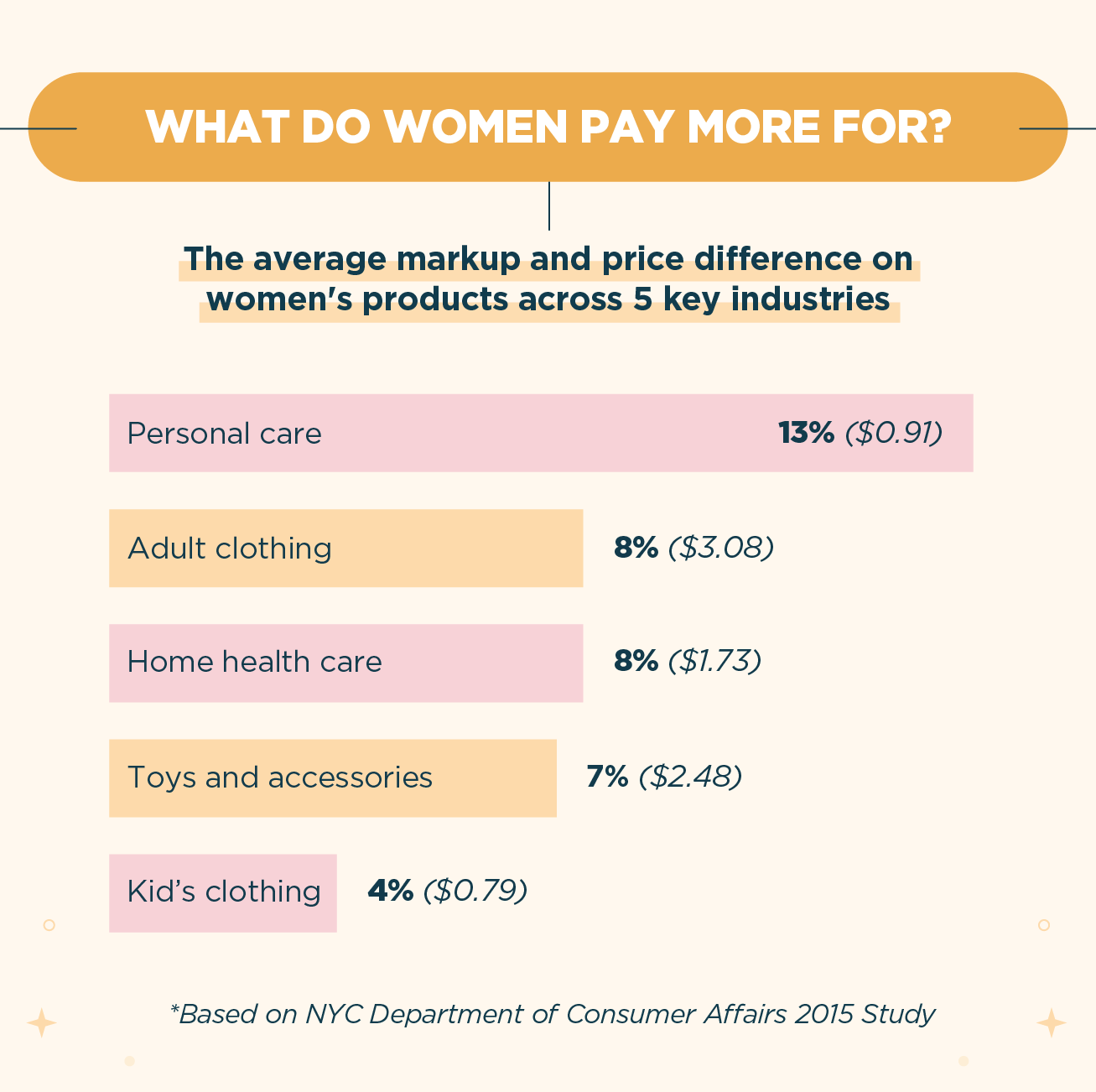 The study conducted by The New York City Department of Consumer Affairs analyzed 794 items across 35 product types, there are a number of items women often pay more for:

Adult clothing: For comparable items like jeans and button-up shirts from the same manufacturers as men’s clothing, women pay an average of 8 percent more.

Personal care: This is the industry with the highest markup for women’s products, with products costing an average of 13 percent more. This includes items like razors, hair care, deodorant, and body wash.

Services: Women pay more for dry cleaning and haircuts than men — even when they bring the same shirt or request a short haircut. The California Assembly’s Office of Research found 64 percent of dry cleaners charged women more for an identical shirt and 40 percent more for short cuts. Other services susceptible to the pink tax include car insurance and repairs.

Why Do Women Pay More? 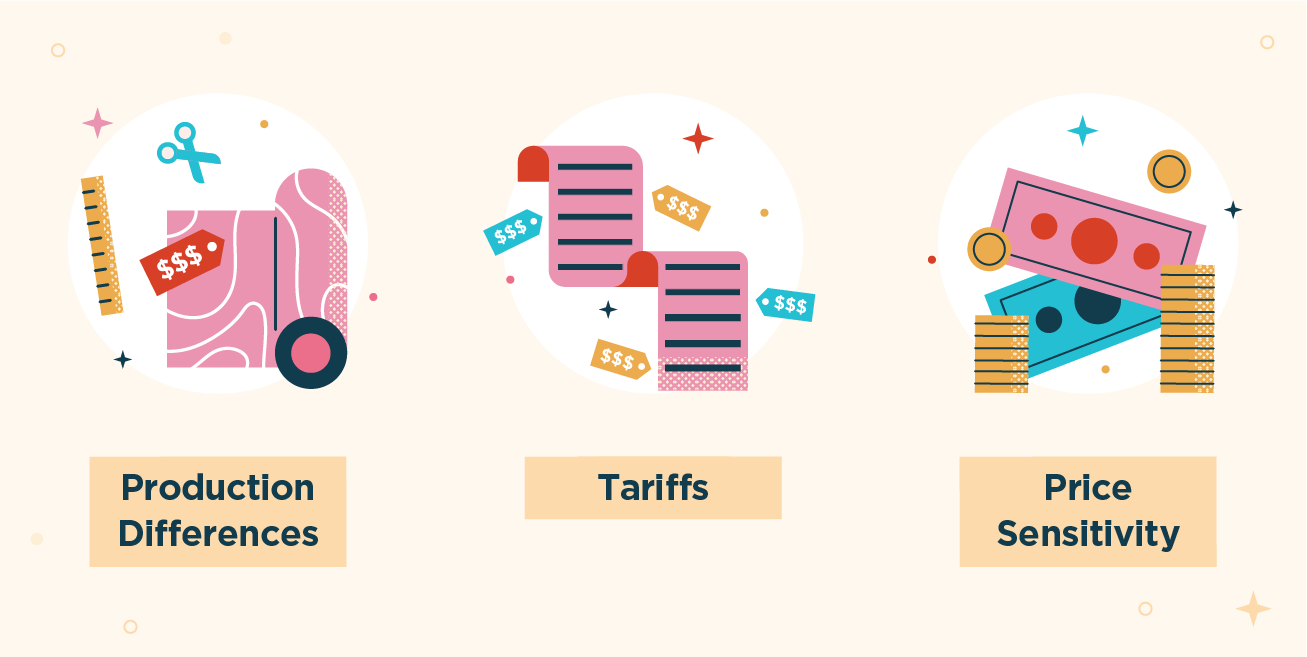 The reasons why women pay more for the same goods and services are as varied as the products and industries themselves. As with many issues of inequality, there are causes that are intentionally discriminatory, and others that are driven by precedent and profits.

Production differences: It’s possible that in some instances products marketed towards women are more expensive because small changes in manufacturing, like color, require additional materials at a higher rate. Or if a product requires different materials, and is made at a slightly smaller scale, the cost of those additional materials may be distributed among fewer consumers, increasing the price.

Tariffs: Not all the responsibility of the pink tax falls on brands and manufacturers. Tariffs charged on the import of international goods are often higher on women’s products. Most of the United States’ apparel imports are gendered, and the average rate on women’s clothing is 15.1 percent — while men’s clothing is taxed at 11.9 percent.

Price sensitivity: Some manufacturers may find that women are less price-sensitive to their products than men. This means that they are more likely to purchase a product regardless of whether the price goes up or down. If this is the case, then companies will likely charge more for women’s products simply because they can. The belief that women are less price-sensitive may be outdated, though. A recent study found that two-thirds of women were likely to use their phones in-store to compare prices, whereas only half of men would.

Don’t Get Ripped Off by the Pink Tax

Understand that when you’re buying something marketed for women, you may simply be paying for the packaging. If you’re truly out for a wise purchase, be sure to comparison shop whenever possible. Check the ingredients of your body wash or deodorant, as they may be no different than the men’s versions.

Remember that it can be hard to tell from packaging how much you’re actually buying. Though two products may be the same price, one may contain less product — making it more expensive.

When considering a large purchase like a home or car, do your due diligence. Make sure you know the true value of the purchase you’re making, and ask around to find the best rates.