Salary negotiation is a crucial step when job-hunting, as upfront negotiations could establish your financial trajectory for years to come. Unfortunately, new research shows that the majority of Millennials aren’t negotiating, and with entry-level salaries coming in way under those of previous generations, Gen Y young professionals may be doing themselves a major disservice.

We asked 1,000 Millennials whether or not they’ve ever negotiated their salary, and the results were surprising.

Let’s take a deeper dive into these survey results.

1. 58% of Millennials have not negotiated their salary 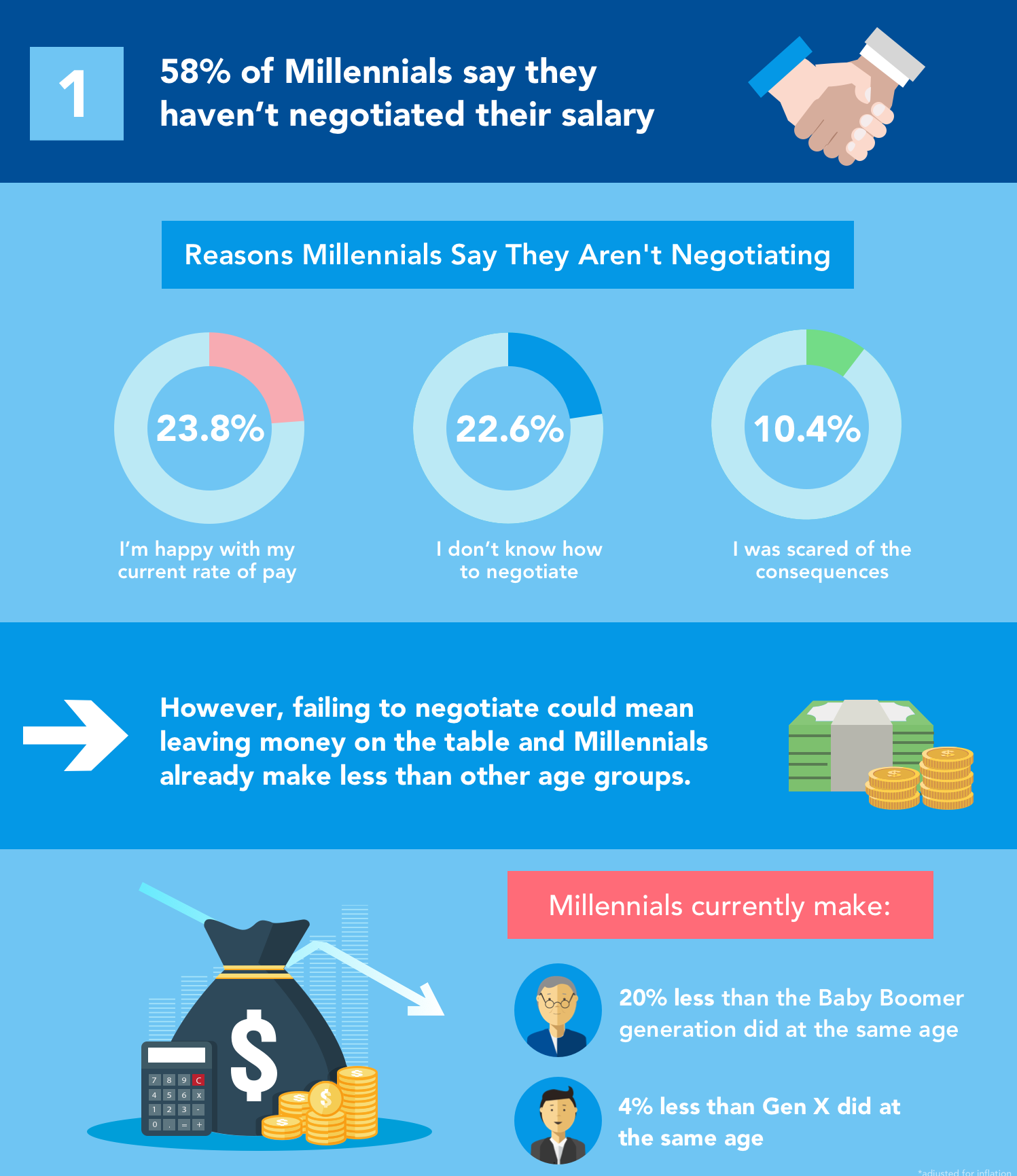 The majority of Millennials surveyed said they had never negotiated their salary. So, why are young professionals reluctant to fight for more? Of those surveyed who said they did not negotiate, reasoning was as follows:

According to recent data, Millennials’ starting salaries are approximately 20% less than Baby Boomers made at the same age, and 4% less than Generation X did at the same age. Failing to negotiate, regardless of reasoning, could mean leaving a great deal of money on the table.

2. Women were 1.3x more likely to report being happy with their current rate of pay 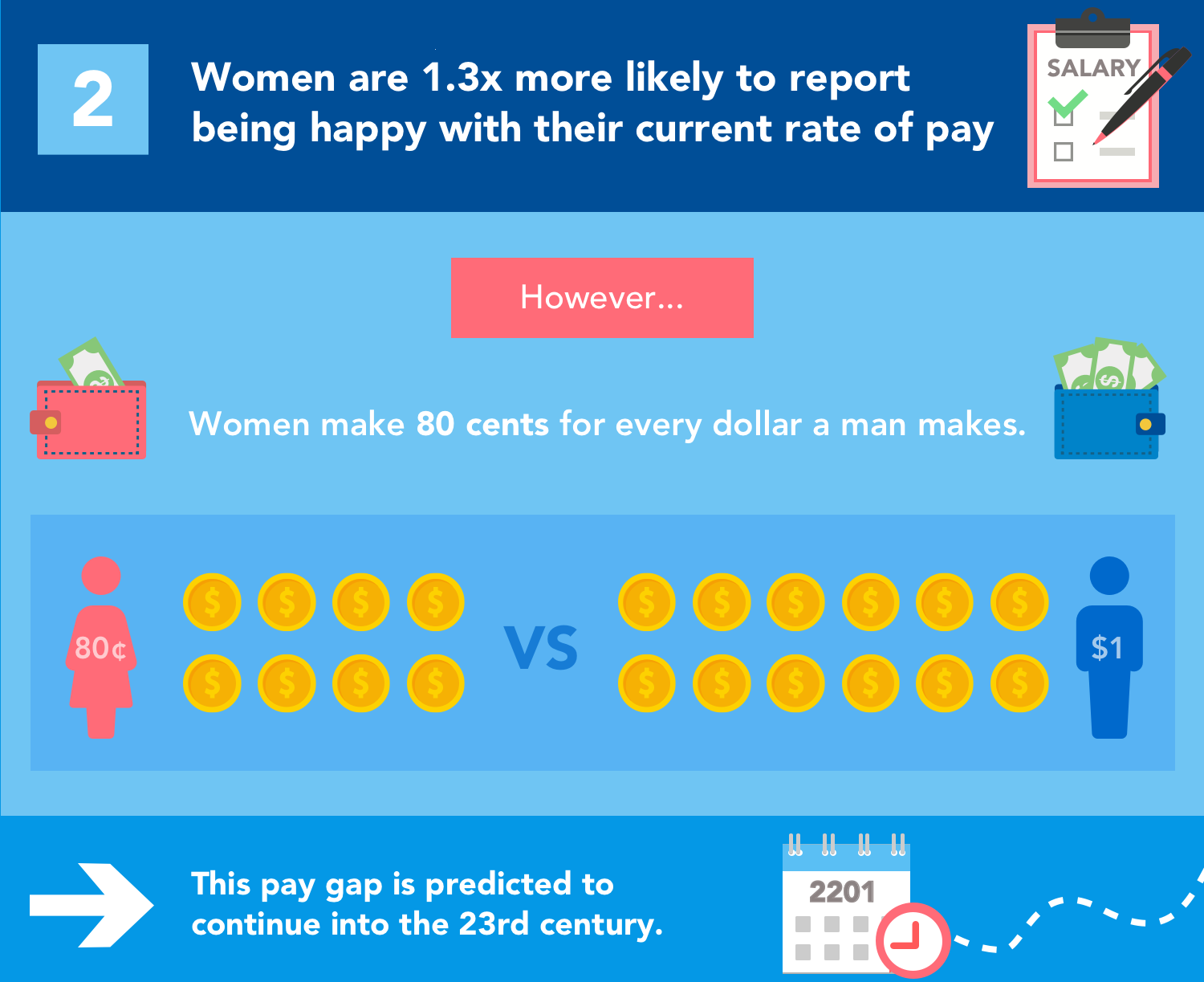 3. Almost 1 in 4 people haven’t asked for a salary increase because they didn’t know how 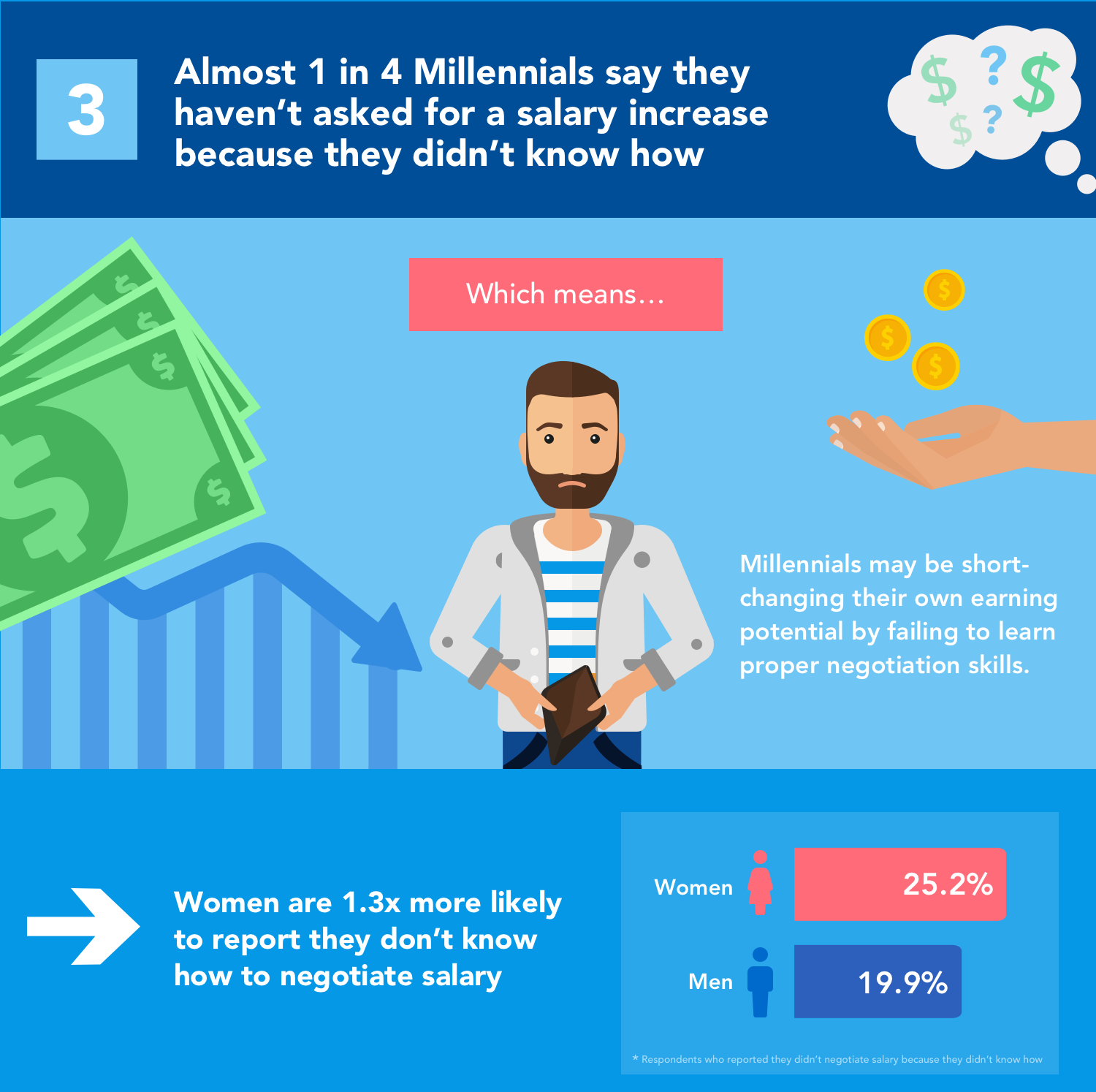 Millennials may be short-changing their own earning potential by failing to learn proper negotiation skills. Lack of knowledge kept 25% of survey respondents from asking for more money.

Learning how to negotiate your salary and becoming comfortable with these types of conversations in a professional setting could increase your lifetime earning potential exponentially. Make it a point to research proper negotiation skills and position yourself (and your wallet) for success.

4. 1 in 10 Millennials were scared of the consequences of negotiating their salary 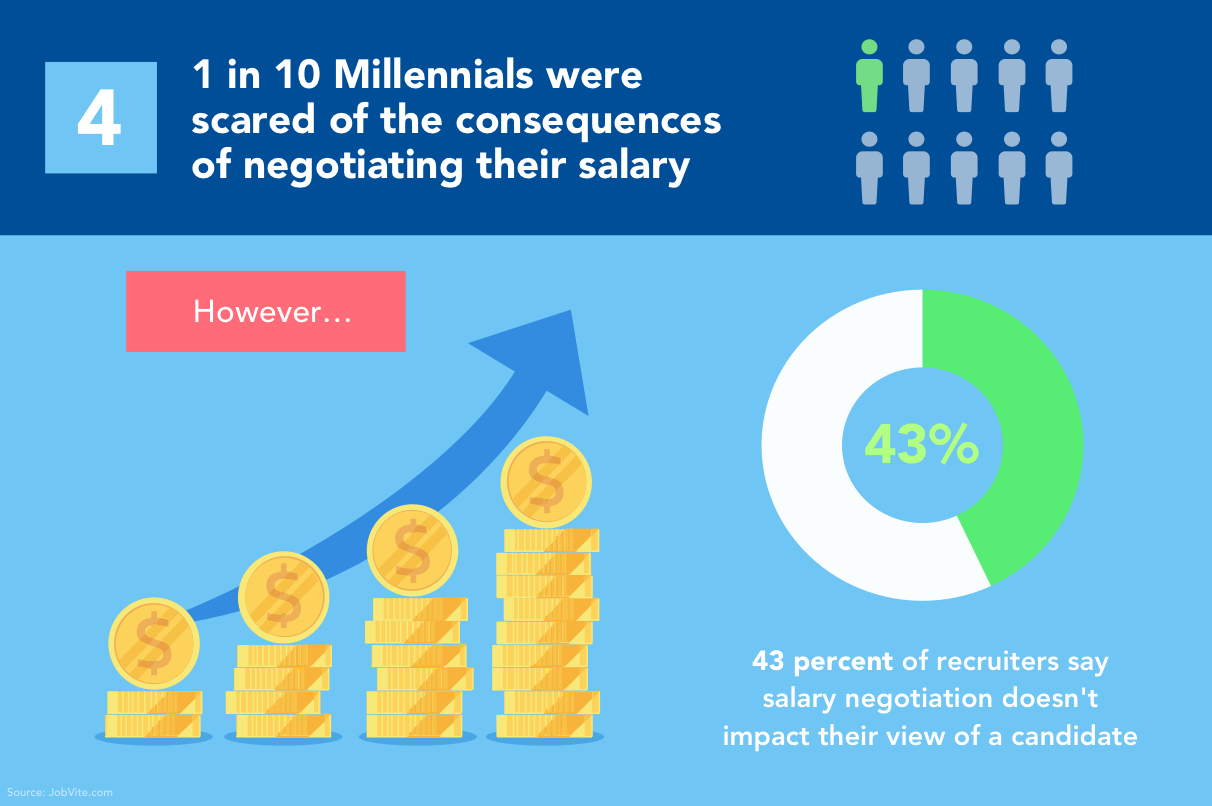 Just over 10% of those surveyed said they had never negotiated their salaries because they were concerned about the consequences. This apprehension is in stark contrast with the thoughts of recruiters.

5. 39.5% of Millennials surveyed have negotiated their salary 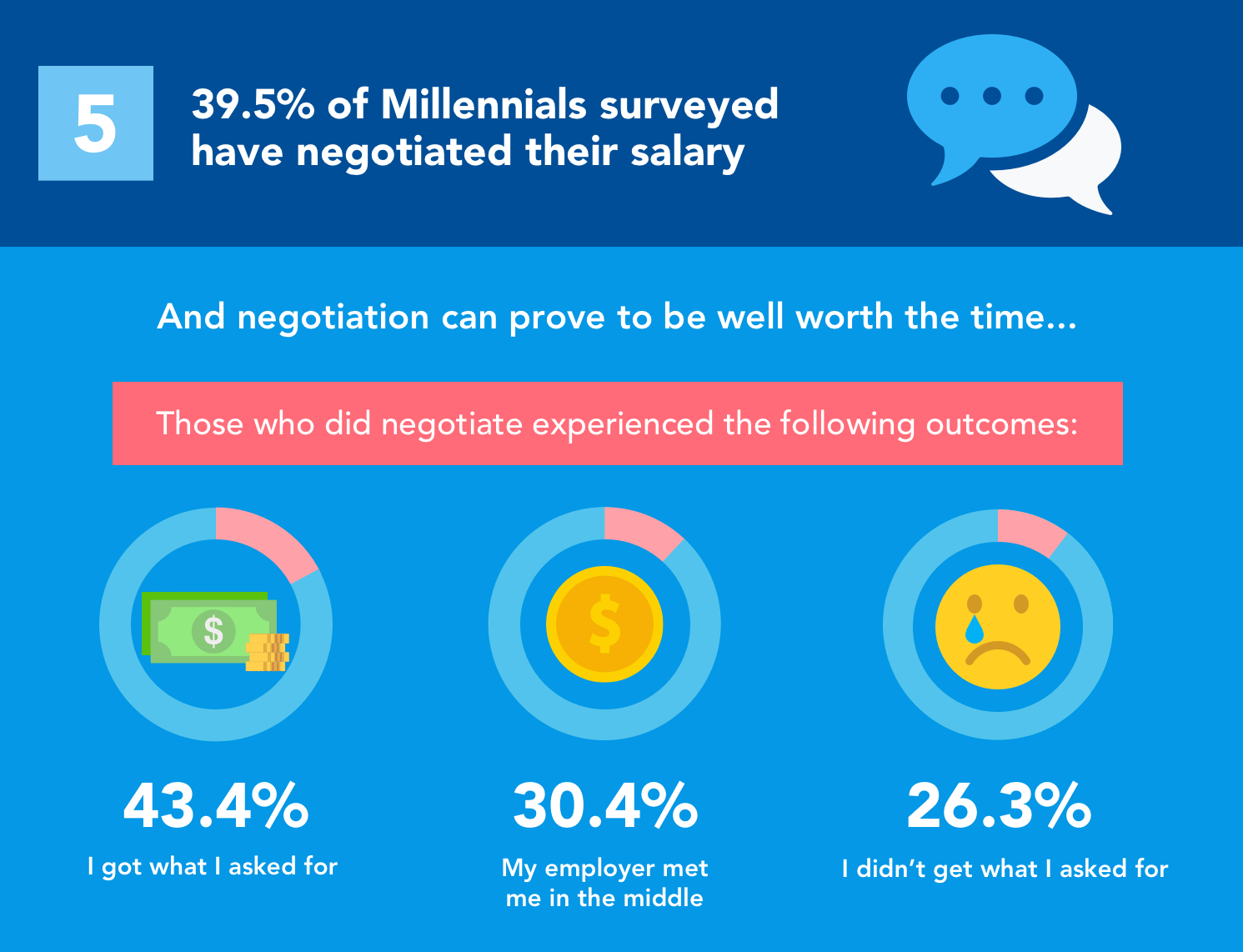 Something to note about the above responses: none are negative. The majority of those who chose to negotiate ended up getting what they asked for, and 30.4% found that their employer was willing to compromise and meet them in the middle.

Why Salary Negotiation is Important

Failing to negotiate your salary can affect your earning potential for years to come. Here are some important reasons you should work with your employer to make what you deserve:

Let’s take a look at this in action: 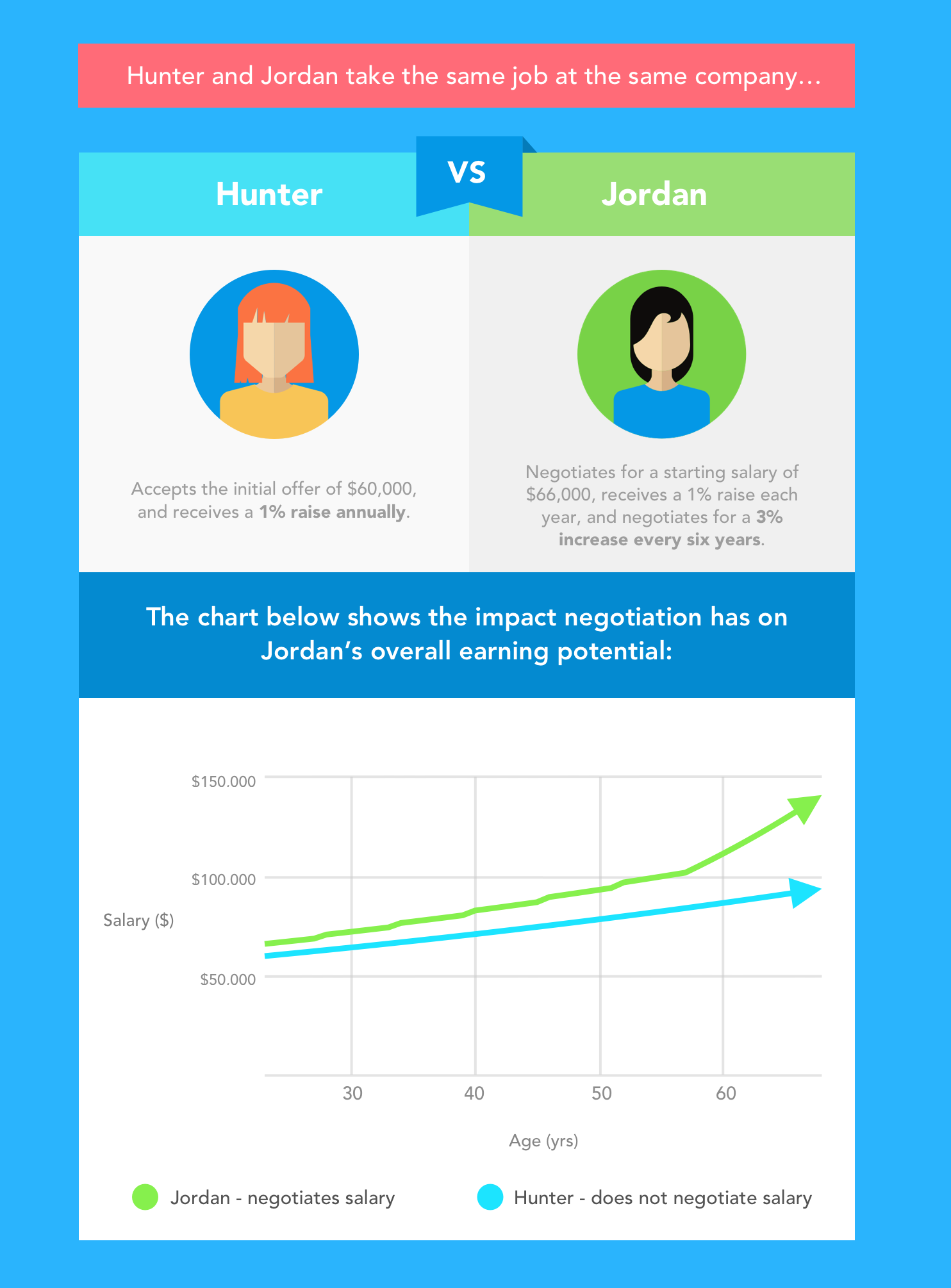 If both employees continue to work at the company in question until retiring at age 60, Hunter will have tapped out earning potential at $86,705, while Jordan will have reached $111,574 per year — all thanks to salary negotiation.

While the majority of Millennials aren’t negotiating their salaries, those that do tend to experience positive results. Consider the benefits of working with your employer to earn what you think you’re worth, and increase your lifetime earning potential and download our full infographic here.

This study consisted of one question conducted using Google Surveys. The sample consisted of no less than 1,000 completed responses per question. Post-stratification weighting has been applied to ensure an accurate and reliable representation of the total population. The survey ran between December 6th – December 10th, 2019.