The Tax Cuts and Jobs Act of 2017 (also known as the “Trump Tax Cuts” or “GOP Tax Plan”) is the most significant piece of tax legislation in decades—which has made it the subject of many questions and inquiries. The legislation lowered the tax rate across all 7 tax brackets, and it also adjusted some of the tax brackets by a wide margin. Furthermore, it eliminated most itemized tax deductions, while nearly doubling the standard deduction for most tax brackets.

But here’s what most people want to know about the Tax Cuts and Jobs Act: does it benefit me, and is it better than the tax code that came before?

Let’s dissect this complicated piece of legislation so you can figure out how your tax situation may be affected.

You can read the full bill at Congress.gov.

Changes to the Personal Tax Rate

Prior to the Tax Cuts and Jobs Act, there were 7 tax brackets that each encompassed a different range of incomes. The new legislation keeps the 7 tax brackets, but:

Take a look at the new tax brackets for Single Filers and Married Couples Filing Jointly. 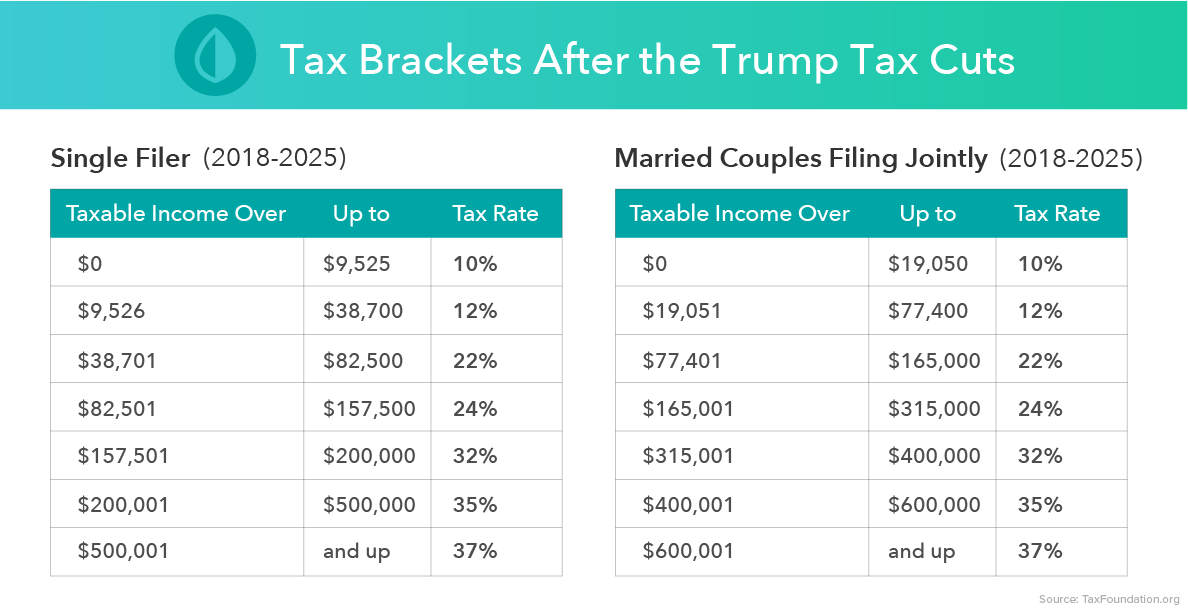 As you can see, the Tax Cuts and Jobs Act grants most taxpayers a lower tax rate than the previous law. That means your tax obligation or tax refund might be different than it was with the prior tax structure—especially if you’ve moved into a different tax bracket. It’s impossible to determine exactly how much it may have changed, but chances are that it will be different from taxpayer to taxpayer.

When you’re budgeting, be sure to set some money aside before you file taxes, just in case your tax obligation is higher. Additionally, you may have to adjust your withholdings on your Form W-4 at work so you can optimize your tax refund.

Changes to Standard and Itemized Deductions

All taxpayers can shield a certain amount of their income from being federally taxed. You can choose either the standard deduction—a predetermined amount set by the government—or you can itemize your deductions. When you itemize, you add up all of your tax-deductible expenses individually; it’s possible that your itemized deduction could be greater than the standard deduction.

The itemized deductions that remain include:

So, is the Tax Cuts and Jobs Act better for your deductions, or worse? It completely depends on your personal financial situation. You may be worse-off if you previously claimed any deductions that are now eliminated—but you also may not be, since the standard deduction has been doubled. If you still plan on itemizing your deductions, be sure to heed this tax tip: always keep documentation of your deductible expenses, and calculate whether or not your combined expenses will be greater than the standard deduction.

It’s important to note that the state in which you live may also affect how much you’re affected in this category. The Tax Cuts and Jobs Act limits state and local tax deductions to $10,000. If you’re living in an expensive state, like New York or California, then you’re less likely to earn higher tax savings than under the prior law. 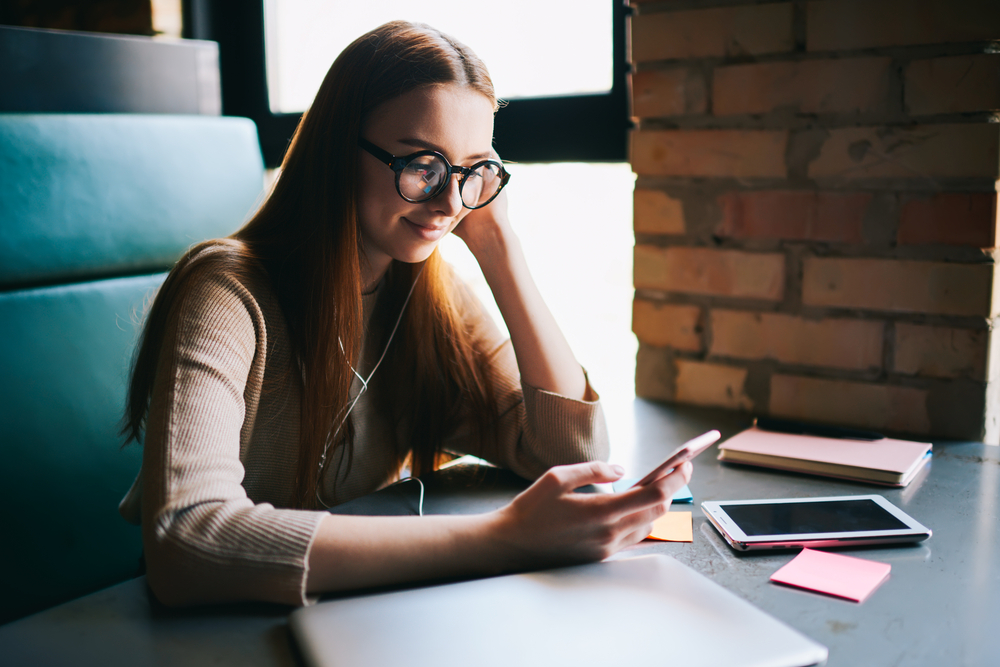 The previous tax law granted the personal exemption, which enabled a taxpayer to deduct $4,150 for each dependent they claimed. The Tax Cuts and Jobs Act eliminated the personal exemption. This may be harmful to large families: Families with lots of dependent children may not be able to deduct as much money, even with the doubled standard deduction and with the increase in the Child Tax Credit from $1,000 to $2,000.

The Congressional Budget Office (CBO) estimated that the repeal of the individual mandate would reduce the federal deficit, but cause 13 million more people to go uncovered. As a result, health insurance companies may lose money, and will have to increase their premiums. The CBO estimated that premiums could increase by 10% on average due to the TCJA.

Changes to the Estate Tax 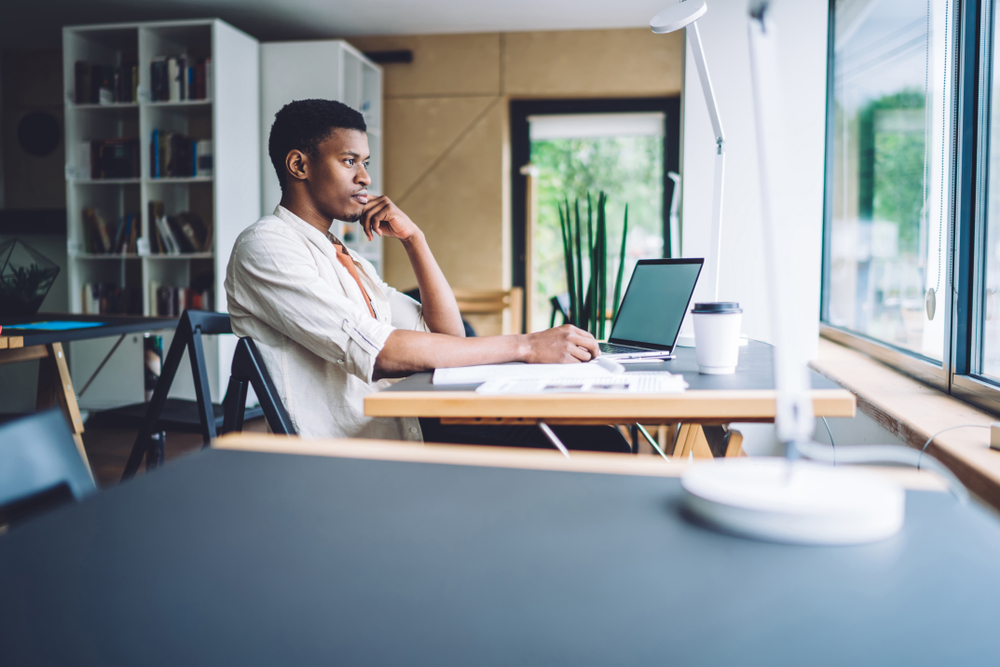 If you own a pass-through business (sole proprietorship, partnership, or S-corporation), then the Tax Cuts and Jobs Act grants your company a 20% deduction. In fact, corporations in general see the largest benefits from the TCJA—the new tax law cuts the corporate tax rate from 35% to 20%, which is hugely beneficial to shareholders.

One thing that’s interesting about the Tax Cuts and Jobs Act is that the individual tax and estate tax provisions expire in 2025; however, the repeal of the individual mandate does not expire. Why do these provisions expire? Congress wanted to reduce the cost of the legislation, and the law was passed under strict Senate budget rules that demand no deficit increase after the tenth year.

In fact, the lowest-earning taxpayers may be faced with the largest tax increases by 2025. 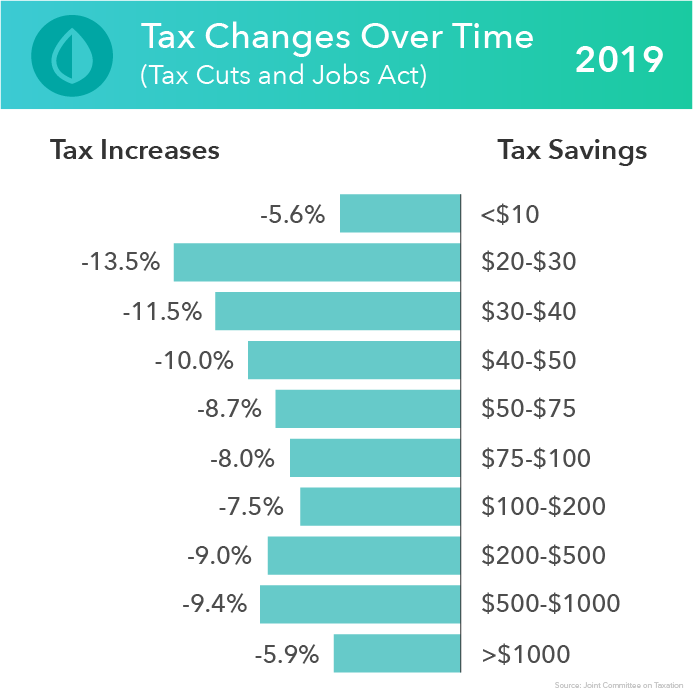 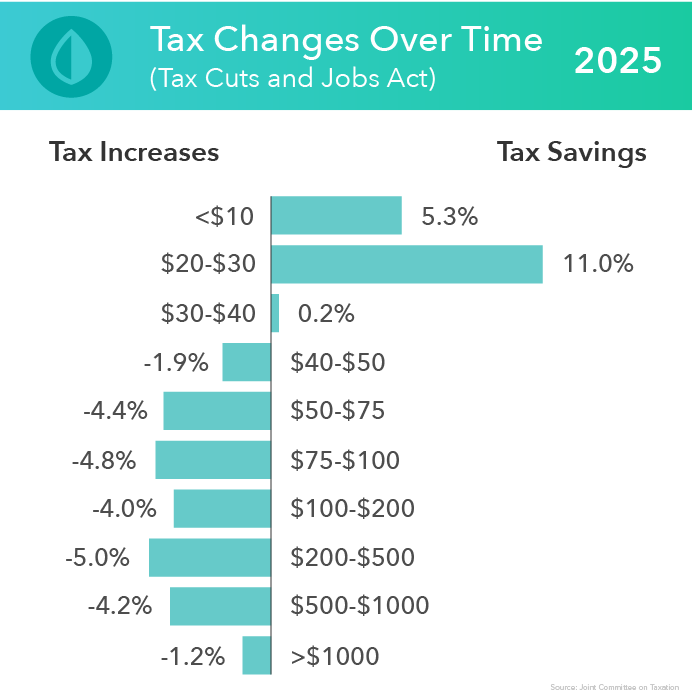 These estimates are not set in stone. But, as of late 2019, the Joint Committee on Taxation estimates there will be tax increases by the expiration of the law. Congress can pass legislation to extend the provisions of the Tax Cuts and Jobs Act, but it’s impossible to predict whether this will happen—and an extension may or may not prevent the tax increases. It’s also unclear if extension of the law would violate Senate rules on budget deficit.

What’s the verdict? Does the Tax Cuts and Jobs Act benefit you or not?

Again, it all depends on your personal financial situation—how much income you make, how much you invest, whether or not you own a business, what expenses you deduct and how much you deduct, etc. But let’s look at the new tax law in a very general (emphasis on “very general”) sense.

The Tax Cuts and Jobs Act may benefit you if:

The Tax Cuts and Jobs Act may harm you if:

There’s considerable debate surrounding the Tax Cuts and Jobs Act. Here are the general arguments made by proponents and opponents of the new tax legislation.

Arguments for the Tax Cuts and Jobs Act

Proponents of the Tax Cuts and Jobs Act argue that the legislation succeeds in granting tax cuts to most taxpayers, regardless of income. They argue that higher tax cuts for high-earners and corporations will create reinvestment in the economy (a theory known as supply-side economics) and greater job growth. The arguments are based on the belief that less regulation leads to greater economic growth.

Arguments Against the Tax Cuts and Jobs Act

Opponents of the Tax Cuts and Jobs Act argue that the middle and working class will ultimately shoulder the tax burden. They argue that tax cuts on high earners and corporations will significantly reduce the federal budget, so the government will have less money to spend on institutions that are vital to middle and working-class taxpayers—like public education and social services. Opponents have provided data that suggests corporations do not use the extra funds to create jobs—only to reward executives and shareholders, and that tax cuts on the wealthy are only worsening income inequality.

No matter which side you agree with, it’s clear that the Tax Cuts and Jobs Act may create significant economic changes through 2025. No matter the twists and turns of politics and tax rates, you can always keep your personal finances stable when you create a budget and carefully track your income and expenses month by month. There’s no better time than the present to start practicing better financial habits.

If you’re still curious about the TCJA, you can learn more about tax reform at IRS.gov.