For as long as I can remember, I’ve heard conspiracy theories about the hidden symbols and their meanings in our currency. Outlandish as some of the claims may seem, scholars and skeptical observers alike have taken these claims seriously, and have studied money with an eye toward what these symbols might be trying to tell us. Theories on the matter range from latent Satanic content to religious symbolism to plots for world domination, all originating from pictures and words buried in printed and coined money. Today we will look beneath the surface and examine eight of the more known hidden symbols etched into our currency and the supposed implications they may in fact have. The terrorist attacks of September 11, 2001 gave new life to conspiracy theorists everywhere. In addition to claiming that the U.S. government orchestrated or allowed the attacks to occur, some have also speculated that the $20 bill contains a forewarning of the attacks. According to this theory (purported by www.foldmoney.com) all one needs to do is fold the bill in half, fold the back left up, fold the back right up, and turn the entire bill over to see a picture that eerily resembles the World Trade Center towers going up in smoke. Critics argue that any likeness is coincidental, but it does look pretty creepy at first glance. 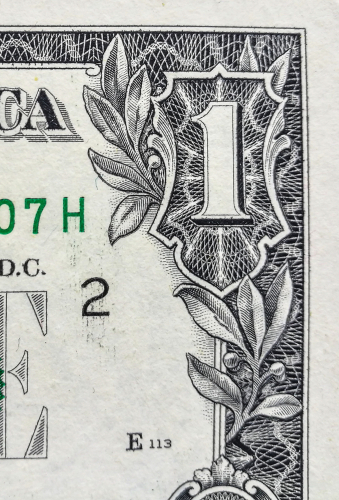 While too small to see in the photo above, the image about five paragraphs down on this Unexplainable.net page reveals what appears to be a hidden owl on the $1 bill. Conspiracy theorists are divided on exactly what this owl (if it is in fact an owl) might be meant to communicate. The folks at Jesus-Is-Savior.com contend that the owl is a remnant of the devil, expressing Satanic meanings through currency. Others, like TheForbiddenKnowledge.com, see a more contemporary meaning, stating that recent presidents Bill Clinton and George W. Bush, “…have been caught with a camera flashing the horned owl symbol with their hands.”

Another popular theory about the U.S. dollar bill is the hidden spider allegedly lurking down at the bottom of the front. Weird and creepy as it may seem to have a creature like this tucked away in our currency, the above Metacafe video entitled “Find The Hidden Spider on the Dollar Bill” zooms in up close and reveals what could in theory be interpreted as a hidden spider. While this theory has its fair share of critics, it also has quite a strong following of supporters, some of whom believe the spider is evidence of a past or upcoming alien invasion. With 2012 fast approaching, we may finally be close to seeing whether they are right. No other imagery from currency is more frequently scrutinized than the “all-seeing eye” on the back of the dollar bill. Bordered by the Latin words “annuit coeptis” (loosely translated as “he approves of our undertakings”), the eye atop the split pyramid has been ascribed many possible meanings by scholars, historians and conspiracy theorists. One popular meaning is, of course, that the eye represents the control that governments or the ruling elite have over the masses. Others argue the eye bears resemblance to the CBS and America Online corporate logos, perhaps indicating a collusion between government and big business to keep tabs on citizens. Other theorists suggest that the eye and the split pyramid are both Freemason symbols which suggest a secret society pulling the nation by its puppet strings. Still another explanation is that the eye is actually the eye of ancient Egyptian god Horus.

The Great (Masonic?) Seal of the United States The Great Seal of the United States contains is rife with Masonic symbolism, according to many scholars and skeptics. Take as just one example the nine feathers beneath the eagle, thought by some to represent nine spheres rising through to return to heaven. Freemasonrywatch.com for instance, contends that the thirty-two feathers on the eagle’s dexter wing is the, “…number of ordinary degrees in Scottish Rite Freemasonry.” Additionally, it is said that the clothed eagle symbolizes “the union of French and American Masons in the strugle for Liberty, Equality and Fraternity.” Accompanying these theories is the fact that known Freemasons such as Benjamin Franklin and Thomas Jefferson assisted in designing the seal, leading to endless speculation about just what they were trying to get across by emblazoning it across U.S. currency.

Much has been made of Mason imagery in U.S. currency, and some believe secret meanings are hidden in the designs of foreign currency as well. A recent example is the British £50 bill, which displays a pyramid lacking a capstone in a similar fashion to the U.S. $1 bill. To some, this constitutes evidence of esoteric Mason/Illuminati symbolism in British currency, perhaps pointing to a worldwide conspiracy by these secret societies to envelop the world in their far-reaching plots for global control and domination. Since Great Britain and the U.S. are so closely linked in history, it is not too far of a stretch for a conspiracy theorist to imagine a connection between the symbols on each nation’s currency.

This image was displayed earlier in reference to the all-seeing eye, but turn your attention this time to the MDCCLXXVI engraved into the base of the pyramid. According to GreatSeal.com, this simply translates to “1776”, the year the Declaration of Independence was signed. However, it has also been suggested that 1776 was chosen because it was the year of the Illuminati’s founding – again, referring to a possible connection between the Illimunati and its attempts to establish a New World Order. Its location at the base of the pyramid could indicate that Illuminati approval is fundamental to the progression of American society (or so it is suggested.) Seen on U.S. coins and bills alike, the Latin phrase “E Pluribus Unum” is translated to mean “of many, one.” The general agreement among historians and scholars is that this refers to the thirteen U.S. colonies deciding to come together and join as a single united nation in response to attacks by Great Britain during the late 1700’s. The first use of this phrase in U.S. currency was on the now-defunct $5 Half Eagle gold piece, in 1795. While it was removed from new currency beginning in 1834, E Pliribus Unum re-emerged permanently in 1866 and has been a fixture on US currency ever since.