You’ve probably heard unemployment rates talked about often in the news, especially recently, as the COVID-19 pandemic brought the economy to a halt, and tens of millions of Americans ended up without work. Many people also have personal experience with unemployment, whether because they lost a job themselves or someone close to them has.

Or, read through for a top-to-bottom explanation of different types of unemployment in economics.

Unemployment occurs when a worker who is willing and able to work is unable to find a job. Unemployment figures can vary depending on the criteria researchers use to define it. However, generally speaking, unemployment numbers exclude demographics like children under 18, retired people, and permanently disabled people who are unable to work.

A similar phenomenon, underemployment, occurs when people do have work, but the work does not pay enough to make ends meet. It can also happen when a worker’s skill set is not fully used by the job they currently have.

Unemployment is a broad category that encompasses many different situations. What are the types of unemployment that economists—and workers—care about? Let’s take a look at that now.

What are the types of unemployment? 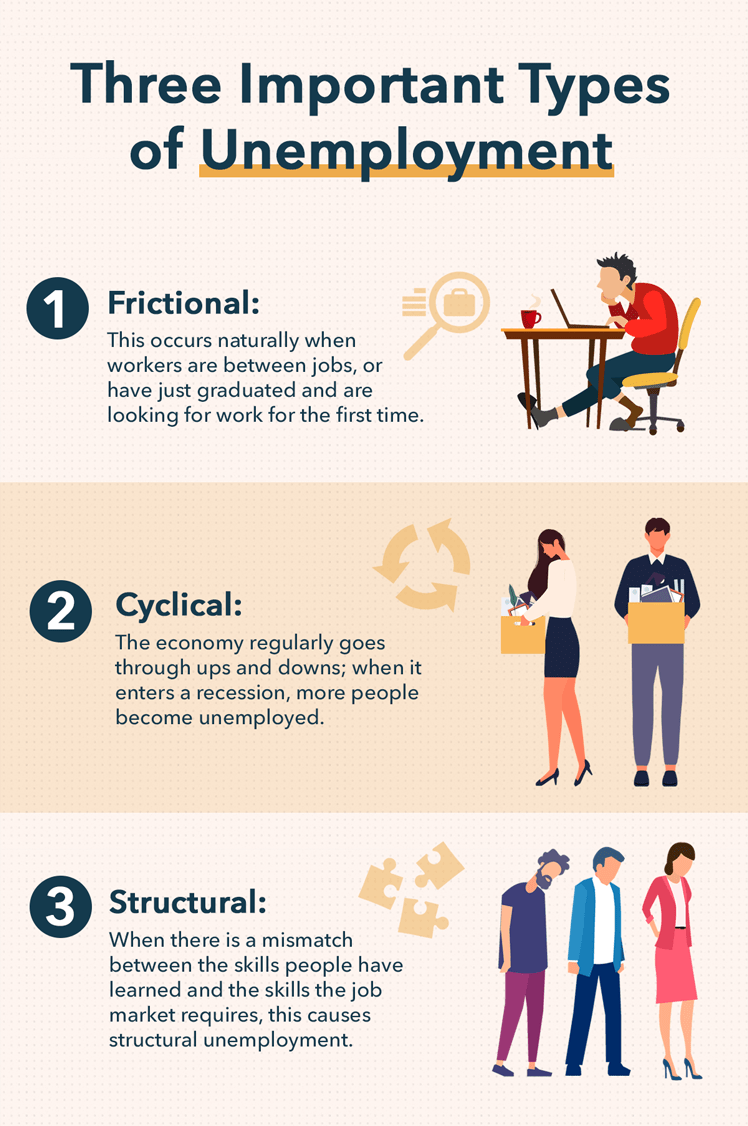 This type of unemployment happens due to the fluctuating nature of the market. During periods of economic growth, there is often more money in people’s hands. This includes employers who are able to hire more employees. When the economy is in a downturn or recession, employers struggle and often have to lay off some employees.

The government can help reduce the damage caused by cyclical unemployment through public policy interventions. For instance, the Federal Reserve can cut interest rates, making it cheaper for banks and businesses to borrow money. This can stimulate the economy and help employers hold on to employees while the economy is in a downturn.

Structural unemployment can be particularly concerning, as retraining workers is expensive, and in the meantime, many previously employed workers now must rely on government assistance programs in order to make ends meet.

Other types of unemployment 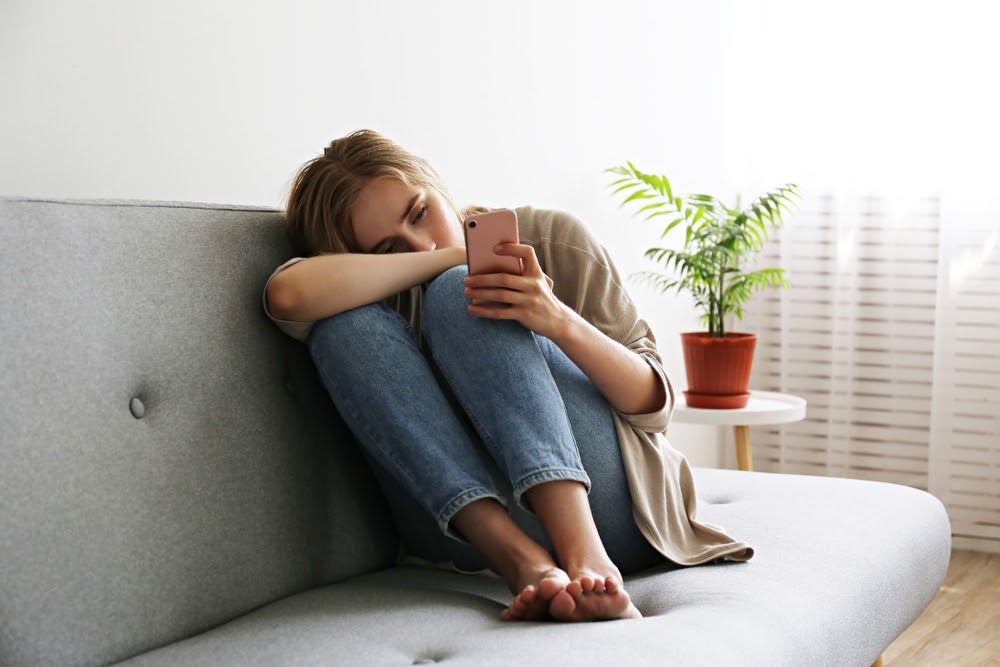 Another factor to consider is underemployment. As previously mentioned, this occurs when workers have jobs, but these jobs pay below a living wage or do not fully utilize the worker’s skill level. Underemployment can occur due to a number of factors, such as the market under-valuing labor. It might also occur alongside the 3 types of unemployment mentioned above.

Underemployment can be a difficult problem for economists and policymakers (as well as for workers) because, though it may seem that the unemployment numbers are low, the actual unemployment numbers may, in fact, be much higher when underemployed workers are factored in. In some cases, even workers who have a full-time job might be unable to make ends meet due to the inflated cost of living in some cities and a minimum wage that is too low.

This means that, while unemployment numbers can be a useful metric to understand how well the economy is doing, it often requires looking into further factors to understand the situation better. It may seem that unemployment is low, but if many workers are underemployed, that low unemployment can be misleading.

People affected by the COVID-19 recession may be experiencing unemployment. As many as 15% of Americans were laid off when the recession hit; half of that total was still unemployed as of Fall 2020. Because this is such an extraordinary event, it can be hard to say what type of unemployment this would fall under, though it could be a form of cyclical unemployment due to the fact that an economic recession brought it on.

In order to combat the worst personal effects of unemployment, no matter what kind it is, state governments implement unemployment insurance programs. These programs usually require workers to pay a portion of their monthly earnings into the administration; then, they have the right to claim benefits if they are laid off. It’s a form of socially-funded insurance that protects people from financial hardship if they are laid off. 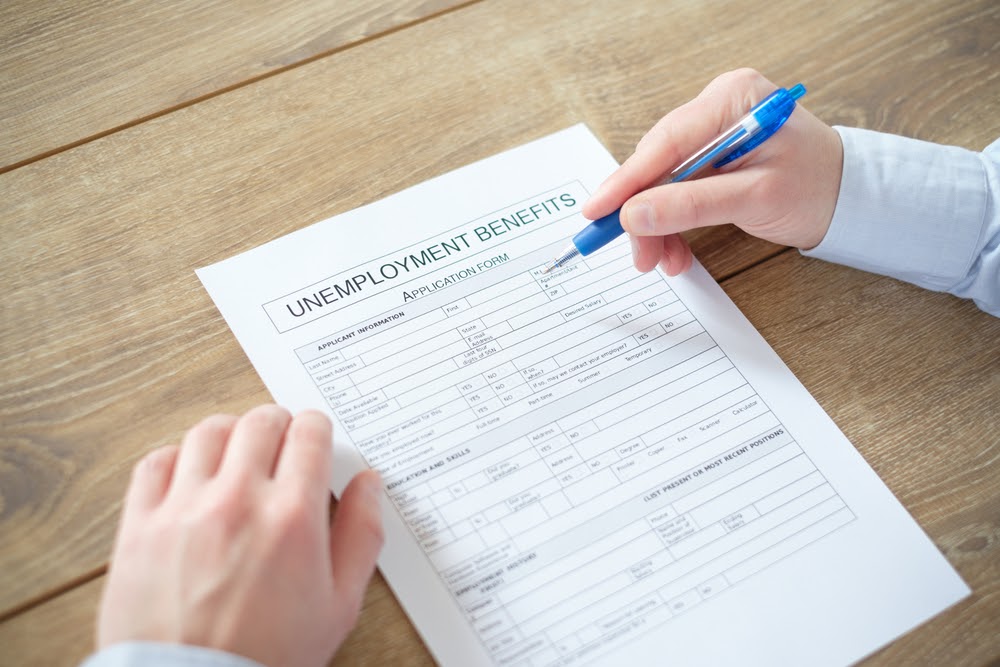 While workers might experience any of the kinds of unemployment listed above, the good news is that it doesn’t matter when it comes to getting connected with sources of aid. The bad news is that, as of Fall 2020, the government has not passed any new stimulus packages for COVID-19 economic relief. However, individual states still administer their regular unemployment insurance benefits. Be sure to find your local state’s unemployment administration and apply for benefits as soon as you can to protect your personal financial wellbeing.

Unemployment insurance usually only lasts for a few months, so it’s important to focus on finding a new job or another source of income while you are living on benefits. Reassessing your finances after a job loss can be challenging, but it’s important to remember that you have resources available to you.

Types of unemployment: the key takeaways

Here’s a quick review of what was explained in this article.

Whatever type of unemployment you might be experiencing, it’s important to get a handle on your personal finances. One way to do that is by starting a budget. You can use the Mint app to get started making a monthly spending plan, assessing your different financial accounts, and managing outstanding debts — all in one convenient place.